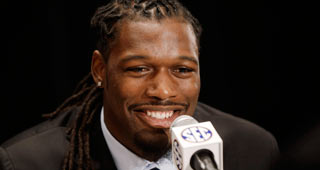 But the question teams will have about him have more to do with his physiological makeup than physical.

"There are two ways of thinking about it," said the first college director. "You could say, now, he's just going to playing the game, he doesn't need to worry about not getting hurt and making it anymore, and he'll feel more comfortable now that it's football only and he won't be concerned about the draft and he can just play ball like he did his first two years. Or you could say, 'Now that he's getting paid, is he gonna coast?' That's the question you have to answer." 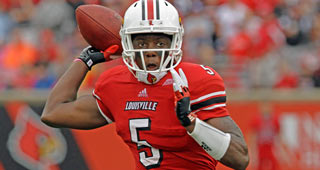 "He's accurate, poised, smart, productive," said one AFC college scouting director. "The body type is the concern. You're gonna have to see him at the combine. He looks small and skinny to me. But he gets rid of the ball so quick and makes such good decisions, maybe you can live with that. If I had the first pick, I don't know that I'd see it, but if you're comfortable with his body, I can see where you would do it."

Another AFC college director called Bridgewater, "a second-rounder. Shorter and smallish in size, but he has solid arm strength, he's a good athlete, solid accuracy. Not dynamic or a special talent, but he has NFL starter-caliber skills, and he's a good kid with all the intangibles."

Marcus Mariota requested his draft stock be evaluated by the NFL despite a Dec. 3 announcement that he would remain at Oregon in 2014.

Mariota is expected to be a top-10 pick whenever he enters the NFL Draft.

Teddy Bridgewater is largely rated as the top quarterback prospect in the 2014 NFL Draft, but he is unsure if he will declare.

"I've been hearing all these stories that I've made a decision -- I haven't made a decision," Bridgewater said Monday. "I will talk to my mom and the coaches before making my decision. I'm not leaning either way."

Bridgewater said he's not leaning one way or the other ahead of Louisville's bowl game.

Bridgewater, who turned 21 last month, will be the first member of his family to graduate from college.

"I can finally say I reached my ultimate goal and it would change my mom's life (financially)," he said. "I can make an impact on my environment, where I grew up in Miami, showing there's no restrictions what you can reach. That someone from the same neighborhood can make it out." 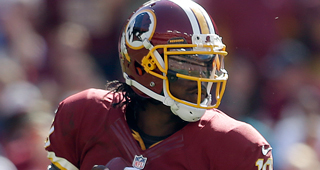 Mike Shanahan believes the Washington Redskins could parlay Kirk Cousins into a first round pick if he performs well during the final three games of the season.

“If he lights it up, hey, maybe we can bring a first-round draft choice back to this organization, and say hey, who are we gonna take in the first round,” Shanahan said. “And I think by him playing and Robert not playing, it gives us a chance to have a few options for our organization that we wouldn’t normally have, and the safety of our quarterback going into the offseason is preserved….And we’re still getting a chance to see a guy that we’ve got a lot of confidence in go out there and play. And his value can only go up. It cannot go down. It can only go up.”

The Redskins don't have their own first round pick in the 2014 NFL Draft with it going to the St. Louis Rams as part of the Robert Griffin III trade. 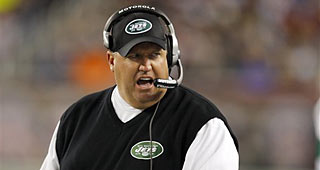 Sheldon Richardson is a legitimate Defensive Rookie of the Year candidate as the 13th overall pick of the 2013 NFL Draft by the New York Jets.

Richardson believes he would go much higher if there was a re-do of the draft.

Jadeveon Clowney is referred to by scouts and high level executives as one of the best defensive prospects in recent seasons, but some question his mental toughness.

"He's a man amongst boys. But he's one of those guys that's a Pro Bowler, or he could be a big-time bust depending on what's on the inside," said an NFC personnel director. "That's what we'll all be digging into."

"I think there's flashes of brilliance and flashes of extreme inconsistency," said an AFC general manager. "I mean, it's a boom or bust thing. ... Does (Clowney) have all the talent in the world? Yeah. For people to get secure with him, it's going to come in the interviews, the one-on-ones with teams. They'll try to get him off the pre-scripted stuff from the agent. You have to be able to pass that smell test. Whoever drafts him is going to dig into every nook and cranny on him. And they're going to see what's in his soul."

Clowney has drawn comparisons to Julius Peppers and Jevon Kearse.

Derek Carr is moving up draft boards and is making an argument as one of the best quarterbacks available.

One general manager believes Carr could be the first overall selection in the 2014 NFL Draft.

"He'll blow up at the Combine," said the GM.

Bryce Petty will return to Baylor for his senior season.

"I will definitely be back next year," Petty told KWTX-TV in Waco, Texas, on Wednesday.

Petty ranks third in the country in QBR.

Petty could become the first senior quarterback selected in the 2015 NFL Draft.

The team that ends up with the first overall pick will likely decide between Jadeveon Clowney and Teddy Bridgewater.

Clowney is almost universally considered the better prospect, but a quarterback is vital to any team's chances of competing.

Unlike the 2012 NFL Draft that featured Andrew Luck and Robert Griffin III at the top, Bridgewater isn't as highly regarded.

"(Bridgewater) has dropped off some [since his sophomore year]," said one AFC general manager. "He does have that quick release, but he's as thin as can be. All his weight is in his ass and he has skinny ankles and wrists. This is the big boy league, and you have to be able to absorb pounding. He's a great kid, and he'll get drafted high, but is he a sure thing? I can't say that."

Marcus Mariota was widely expected to be one of the top selections if he declared.