Derek Carr was confident the Oakland Raiders wouldn't draft a quarterback this offseason, but he was still bothered by the speculation that they would.

"Honestly, it got annoying after a while," Carr admitted. "I'm like, 'Really, they don't have nothing else to talk about?' And I didn't help the situation, trying to challenge people to fights."

The Raiders had nine draft picks last month and didn't use any on a quarterback.

In the wake of the craziness that was the NBA Draft lottery on Tuesday night, there has been talk about reform involving other leagues.

The NFL's official draft account expressed their desire for change.

"Hey, NFL, we want a draft lottery, too," the league's draft account tweeted on Wednesday afternoon.

It's unlikely the NFL will ever implement a lottery unless they are able to prevent tanking.

As with all first-round contracts, Murray's deal is for four years with a fifth-year team option. The contract is worth $35,158,644 fully guaranteed, according to a source.

One NFL team inquired as to whether Daniel Jones would be willing to work out as a tight end because they felt he wasn't good enough to play quarterback.

Lamar Jackson was asked a similar question last season about playing wide receiver and he's now the quarterback of the present and future for the Baltimore Ravens.

The New York Giants selected Jones with the No. 4 overall pick.

Darnell Savage is the first of the 2019 first-round picks to sign a contract.

They traded up with the Seattle Seahawks to select the Maryland safety. 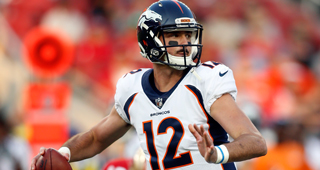 Forty-five percent of first round picks (14 of 31) from the 2016 NFL Draft had their fifth-year options declined.

In each of the last two years, 20 fifth-year options were picked up and 12 were declined.

Jack Conklin was the highest selected player who had his option declined as the Tennessee Titans had selected him eight overall.

The Cleveland Browns had already released Corey Coleman, as had the Denver Broncos with Paxton Lynch.

Next year's draft will be in Las Vegas, which promoted odds to be posted early.

"With the draft in Las Vegas next year, we wanted to get a head start and carry the momentum from the recent draft," said Jeff Sherman of the Westgate SuperBook. "The first overall selection prop bridges our college and pro football menus, and the closer to the draft next year, we will add a multitude of wagering options."