The Baltimore Ravens had a strategy of seeking quantity at the 2018 NFL Draft in which they eventually selected Lamar Jackson 32nd overall.

Ozzie Newsome and Eric DeCosta both loved Jackson and the Ravens were starting to fall out of love with Joe Flacco.

“We wanted quantity that day,” said DeCosta after Sunday's game. “With the way the draft fell that year, we saw a way to really improve our offense. We were hoping the phone was gonna ring, starting at 16.”

Baltimore traded down from 16 to the Buffalo Bills for 22 and 65.

“We get to 22, and all of the players we liked are still there,” DeCosta said. “So we traded again.”

The Ravens, however, didn't use 25 on Jackson but instead on Hayden Hurst.

“You kinda have to use a strategy,” DeCosta said. “We felt like there was a pretty good chance that Lamar might be there later in the first round, early part of the second round. We were willing, if we could, to trade back, trade back, accumulate capital and then possibly either try to trade back again or in a second round, make a play and get Lamar at that point. But, you know, it was a risk.”

“Were you nervous about losing him?” I asked.

“We were. We were. But I think you’ve got to stay as clinical in the moment as you can, and really just go with all your best information and the plan. So yeah, you’re always nervous. You accept that you’ll lose some players working this way. But I think we try to stay as measured as possible and not get caught up in the moment.”

The Ravens called the Philadelphia Eagles about 32 as they were known to want to move down, but it would cost them Baltimore's second round pick in 2019.

“We didn’t share what we were going to try and do with anybody,” said DeCosta. “Drafts are strange like that. It’s just Ozzie and me at the end of the table, the only ones who really know. When you’re trying to make a decision as important as that, you try and keep it as quiet as you can. Because it’s not that you don’t want to share it with people, but the downside—which would be losing the player—is much greater than the upside of sharing the information with somebody that you care about.

“We didn’t even interview Lamar at the combine because we didn’t want to be associated with him. We didn’t want rumors about us and him to start. They didn’t. We were proud of that. So we pick him, and to hear him talk, and to hear his emotion and to see Lamar on TV with Deion Sanders, so happy, and to see his conviction, and to see his competitiveness. That’s a powerful thing. So, after the pick was announced, we hadn’t even had the chance to tell the scouts and coaches.

Tua Tagovailoa will miss the remainder of the season after suffering a dislocated right hip. Tagovailoa also suffered a posterior wall fracture, sources confirmed to ESPN, and medical officials are continuing to evaluate his injury to determine the best course of treatment. He is expected to make a full recovery.

Nick Saban said after the game that he didn't think the injury was related to the ankle injury that made Tagovailoa a game-time decision for Saturday's game. "It's kind of a freak thing that you seldom see," he said.

"He was good, at least as good as he was a week ago in terms of his ability to move," Saban added. "I don't think anything he did affected his performance in the first half. So the guy played, and I thought he played really well. And we hate it that he got injured. We hate it for him. We hate it for his family. I hate it when any player on our team gets injured. So Godspeed to him and his entire family, and our thoughts and prayers are with them and hope this is not so serious it has any long-term effect on his future as a player." 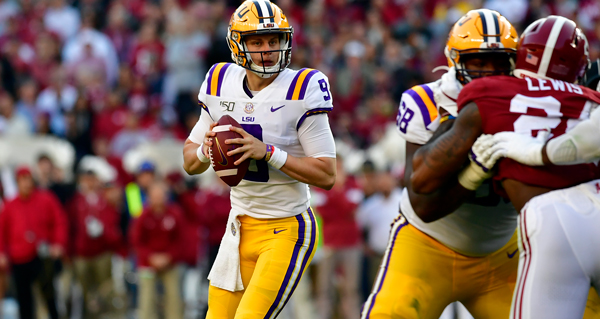 Mel Kiper Jr. has moved Joe Burrow up to No. 1 on his list of quarterback prospects for the 2020 NFL Draft ahead of Tea Tagovailoa and Justin Herbert.

Burrow is the Heisman Trophy favorite and had an excellent performance at Alabama last week.

"Yes. There's no question in my mind," wrote Kiper when asked if he could be picked No. 1 overall. "In fact, when I unveil my updated Big Board rankings in a couple of weeks, I'm going to have Burrow ahead of Tua Tagovailoa and Justin Herbert as the top-ranked quarterback for the 2020 draft. I had already moved up Burrow to No. 6 overall before Saturday's game, but I was waiting to see what he did against Bama before I pulled the trigger to make him No. 1. I'm ready to make the call now.

"How could anyone watch that game and say otherwise? He has all the tools to be an elite NFL quarterback, from size to accuracy and touch to athleticism. What I like most about Burrow is that he's ultra-competitive while staying calm and collected. He didn't blink against a loaded Crimson Tide defense. I've made the comparison to Tony Romo before, and I'm sticking with it. Throw out Burrow's numbers from last season and focus on the improvement in 2019. This is a great quarterback prospect."

In total, there were 22 NFL scouts in the press box for the game.

Alabama's Tua Tagovailoa and LSU's Joe Burrow are expected to be two of the top quarterbacks taken in the draft, while Grant Delpit, Jerry Jeudy and Henry Ruggs III could also be top-10 picks.

After nine weeks of NFL action, the projected 2020 NFL draft order has shifted.

The Cincinnati Bengals are now projected to pick first overall, followed by the Washington Redskins and Miami Dolphins.

Miami was in the first slot before this past weekend's victory over the New York Jets, who are currently slotted fourth.