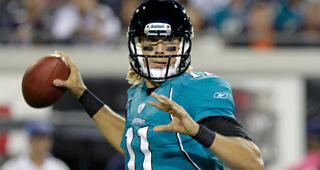 Jack Del Rio says he had no idea the Jacksonville Jaguars would draft Blaine Gabbert with the 10th overall pick in 2011.

Gabbert went 13-35 as a starter for the Jaguars.

Del Rio wasn't even in the draft room when general manager Gene Smith traded up for Gabbert.

"I had no idea we were going to draft Blaine Gabbert," Del Rio said. "No idea. In fact, I left to go get something to eat because our pick wasn't for much longer in the draft. I go and then I'm sitting there filling my plate thinking, 'Oh great, we've got a couple more hours until we pick.' Then I see, 'The Jaguars are on the clock.' I'm like, 'What the blank is going on?' I walk into the draft room, and I could see it on the faces of the people in the room. They knew how uncomfortable that was, how wrong that was."

The Jaguars moved up six spots to take Gabbert.