The Atlanta Falcons have traded Mohamed Sanu to the New England Patriots for a second-round draft pick, according to sources.

Julian Edelman, Josh Gordon and Phillip Dorsett have all been on the injury report in recent weeks.

Sanu is under contract through next season.

The Buffalo Bills are trading Zay Jones to the Oakland Raiders for a 2021 fifth-round pick, according to sources.

Jones was drafted by the Bills in the second round in 2017 out of East Carolina.

The 24-year-old had seven catches for 69 yards in total with the Bills. Jones led the team in all major receiving categories last season, but they signed John Brown and Cole Beasley this past offseason.

The Atlanta Falcons have acquired safety Johnathan Cyprien from the Philadelphia Eagles in exchange for linebacker Duke Riley.

The Falcons lost their in-the-box safety when Keanu Neal suffered a season-ending left Achilles tear against the Indianapolis Colts. 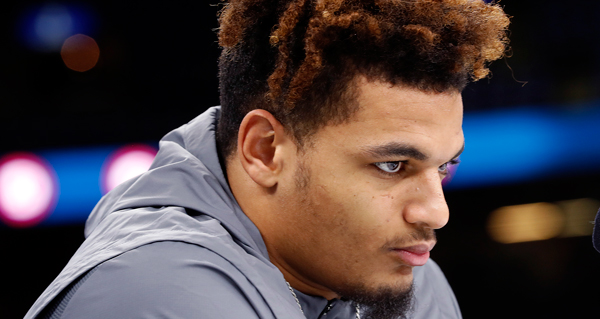 The Pittsburgh Steelers have acquired defensive back Minkah Fitzpatrick from the Miami Dolphins for a 2020 first-round pick, according to sources.

Fitzpatrick received permission from the Dolphins to seek a trade earlier in the week.

He was the 11th overall pick in 2018, but was unhappy playing multiple positions with Miami.

The Dolphins are also getting the Steelers' 2020 5th-round pick and a 6th-rounder in 2021, according to reports.

The Jacksonville Jaguars have traded a 2020 fifth-round pick to the Pittsburgh Steelers for quarterback Joshua Dobbs.

Dobbs was the backup to Ben Roethlisberger.

Gardner Minshew will remain the starter for the Jaguars, who have placed Nick Foles on injured reserve with a broken clavicle.

The Minnesota Vikings have traded an undisclosed draft pick to the Baltimore Ravens in exchange for kicker Kaare Vedvik.

The pick will be a fifth rounder in 2020, according to a source.

Vedvik, a native of Norway, was 12-of-13 on field goals in the preseason the past two years for Baltimore after being signed as an undrafted kicker in 2018.

In Thursday's preseason opener, Vedvik increased his value by making all four of his field goals, including a 55-yarder, and had two punts over 50 yards.

The New York Jets have agreed to trade linebacker Darron Lee to the Kansas City Chiefs in exchange for a 2020 sixth-round pick, according to a source.

The move came just hours after Mike Maccagnan was fired as general manager and coach Adam Gase was elevated to interim GM.

Maccagnan picked Lee in the first round of the 2016 draft with the 20th pick.

The Chicago Bears have added yet another kicker, acquiring Eddy Pineiro from the Oakland Raiders.

Oakland received a 2021 seventh-round pick, according to a report. If Pineiro isn't on Chicago's active roster for five games, the Raiders won't get the pick.

Pineiro joins Chris Blewitt and Elliott Fry as the third kicker on Chicago's roster. They released Redford Jones and John Baron on Sunday at the conclusion of their rookie minicamp.

The Washington Redskins traded up with the Indianapolis Colts on Thursday night to use the 26th pick on Mississippi State defensive end Montez Sweat.

Steelers Trade Up To Draft Devin Bush At No. 10

Chris Hogan had 35 catches for 532 yards and three touchdowns last season for the Patriots.

The Dolphins have traded Robert Quinn to the Cowboys for a 2020 sixth-round pick.

The Bears will get a sixth-round pick that can become a fifth-round pick, according to a source.

The Raiders have acquired A.J. McCarron from the Bills for a fifth-round pick in 2019.

The Cowboys will acquire offensive lineman Parker Ehinger from the Chiefs for cornerback Charvarius Ward.

The Browns have traded Corey Coleman to the Buffalo Bills for a seventh-round pick in 2020, according to sources.

In the new agreement, Houston will receive a third-round pick in 2018, while Seattle will also get a 2018 fifth-rounder.

The Packers have acquired Knile Davis from the Chiefs for a conditional late-round draft pick.

The Browns have traded Barkevious Mingo to the Patriots for a fifth-round draft pick in 2017.

The Titans have traded Dorial Green-Beckham to the Eagles for guard Dennis Kelly.

Linebacker Matthew Wells was drafted in the sixth round by the Patriots in the 2015 NFL draft.

A source has reported that the Seahawks will receive a conditional draft pick in 2015 from the Jets for wide receiver Percy Harvin.

The Eagles have acquired Darren Sproles for a fifth round pick in a trade with the Saints.

Trent Richardson rushed for 950 yards and scored 11 touchdowns for the Browns last season.

Gabe Carimi started the first 10 games of 2012 at right guard before losing his job to Jonathan Scott.

Stanley Havili gives the Colts their first true fullback in years and should help the offense under first-year coordinator Pep Hamilton.