In 13 NFL postseason games, 14 teams have combined to score a whopping 66 touchdowns. The Raiders, Packers and Cardinals each scored one apiece in their respective losses, while the Chiefs (14) and Bills (12) put on shows before eventually bowing out of the postseason.

The two teams after them will be playing in Super Bowl LVI, pitting the LA Rams’ nine postseason touchdowns up against the Cincinnati Bengals’ five end zone trips.

And why do touchdowns matter? Because the BetMGM bonus code "REALGM" is giving new players the chance to bet $10 to earn $200 in free bets if a player from either team finds paydirt. If that isn’t enticing enough, bettors also have the choice to choose a different promotion: bettors who register for a new account can opt for a risk-free bet of up to $1,000 instead.

With so many good promotions available, it’s time to get off the sidelines and begin your BetMGM sportsbook experience with a week to go until Super Bowl Sunday. We’ll go over how to get the most out of the BetMGM bonus code REALGM and both offers, as well as other perks that BetMGM gives its players that can be used when the Bengals and Rams square off in Los Angeles. 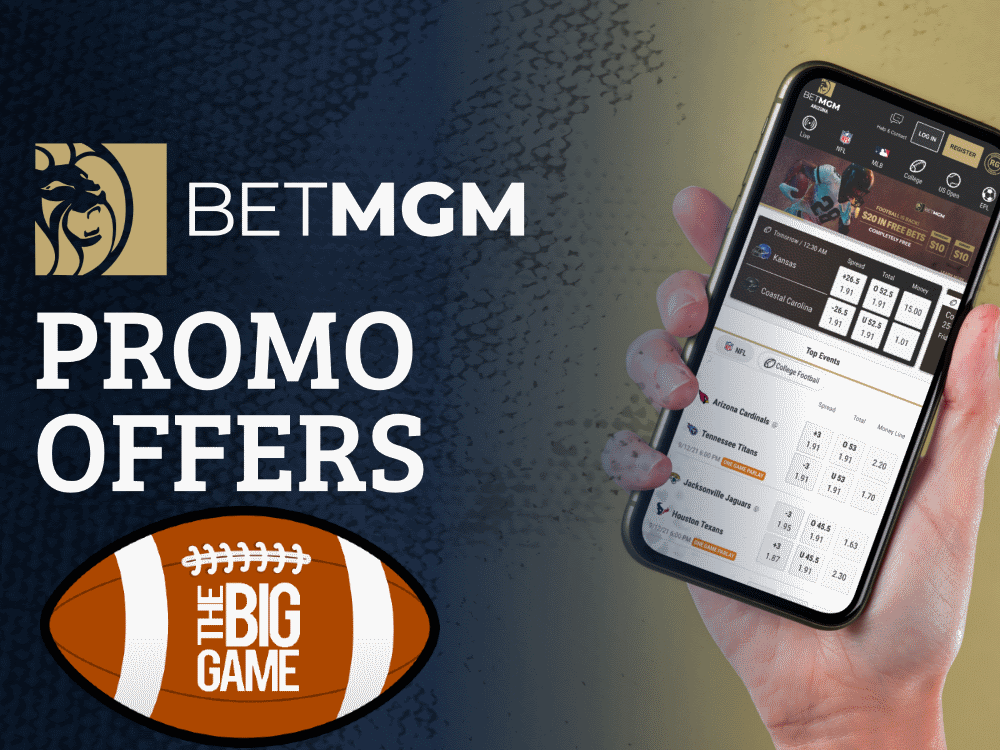 The Rams and Bengals have each played 20 games this season between the regular season and postseason. Combined, they’ve amassed 106 touchdowns. They both averaged 27.1 points per game in the regular season and have some of the best elite skill position talent in the NFL. We won’t belabor the point any longer: Someone is finding the end zone early in Super Bowl LVI. And when they do, you’ll be $200 richer.

Here’s how it works. Use the BetMGM Bonus Code "REALGM"  when you sign up for a new account. That will automatically trigger the promotion, which is valid after bettors place a $10 or more pregame moneyline bet on either the Rams (-200) or Bengals (+165). It must be the very first bet you make on BetMGM. Once a player from either team finds paydirt, you’ve earned $200 in the form of four $50 free bets. You can also earn profit on your original moneyline bet, so don’t forget about that!

And that’s all you need to know. A $10 bet on either team’s moneyline yields $200 in free bets if someone finds the end zone. The BetMGM bonus code couldn’t be simpler to make or win.

If you’d rather have a little more skin in the game, there’s another BetMGM bonus code offer to choose from: a risk-free bet of up to $1,000. Here’s how it works. Bettors place their first wager on BetMGM up to $1,000. If it wins, bettors have profited on their first bet at the online sportsbook. If it loses, BetMGM will refund the original amount wagered up to $1,000 in the form of free bets, giving players a second chance of sorts.

Players can make that risk-free bet on any market with any set of odds (other than the Super Bowl moneyline – which would trigger the other offer). There are no minimum odds restrictions like we sometimes see a other sites, so this is an obvious benefit to the players.

Losing bets under $50 are refunded with a single credit for the full amount; over $50 and it is five equal free bets worth 20% of the losing wager.

Whichever promotion you’ve chosen to kick off your BetMGM experience, there are additional offers in play for all bettors. The one pertaining specifically to Super Bowl Sunday is the One-Game Parlay Insurance that BetMGM offers.

Simply place a One-Game Parlay with four or more legs using player and team props from the Bengals and Rams. If exactly one leg of your parlay loses, BetMGM will refund your original amount wagered back in the form of a free bet, up to $25.

While that promotion pales in comparison to the other two, it’s available to ALL bettors and is a nice promotion for bettors who just miss out on a big payday.