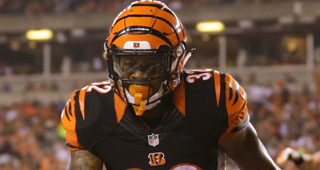 Jeremy Hill has signed with the Las Vegas Raiders.

Hill last played in the NFL in 2018, when he suffered a torn ACL in the New England Patriots' season-opening victory over the Houston Texans.

The Raiders had issues running the ball in short yardage situations last season.

A team source acknowledged that Hill is a "long shot" to make the Raiders roster.