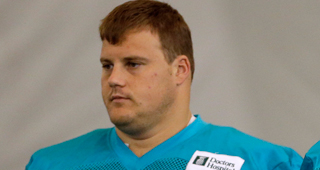 The issue of Donald Trump's candidacy for the White House has been discussed in NFL locker rooms.

Some players say there have been low-level confrontations while others say friendships have ended.

Here is a straw poll of 43 NFL players on how they plan on voting in the election:

Recalled another black player: “I was talking Trump and Hillary with a white teammate, and the conversation was fine. Things got a little heated when he said, ‘Trump isn’t racist.’ I don’t know how anyone doesn’t see how that’s just not true. We talked about that statement for two days.

“We were taking a break during practice maybe four days or so after our last conversation about Trump,” the player continued. “He came up to me and said, ‘Here’s why Trump’s not racist and Hillary is.’ Then we argued for another day. It was sort of heated again.”

Rex Ryan is publicly supporting Trump, as is Richie Incognito.

“I think that he can help this nation get back to a world superpower,” Incognito told B/R Mag. “Where I think he could help is putting us first again and having that—it's my mentality, too—having that tough attitude where you put America first and everyone's thinking we're the greatest nation in the world. Don't mess with America. That toughness is where I identify with him.”