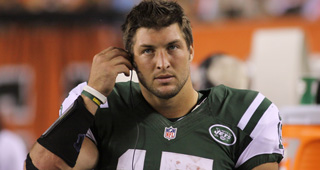 A report last month by Yahoo's Michael Silver cited  "organizational source" as saying Bill Belichick disliked Tim Tebow as a player and there was "no chance" of him signing with the New England Patriots.

"I wouldn't get into the probability of us pursuing any free agent. Every single player has strengths and weaknesses but regardless of that, for anyone to have represented that is the way I feel about Tim Tebow is completely untrue, baseless and irresponsible," Belichick said. "It is unfortunate that something so inaccurate was reported."

Tebow was drafted by the Denver Broncos when Josh McDaniels was head coach. McDaniels is currently the offensive coordinator of the Patriots.