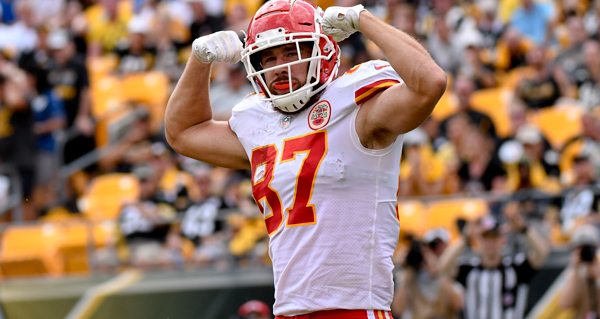 Joe Burrow had a wild day versus the Steelers, throwing for 355 yards and 4 TDs, while also throwing two picks and getting sacked twice. The yards and TDs outshine the turnovers and sacks, placing Burrow at the top of the QB list for fantasy points for the week. Burrow remains a weekly must start.

Cowboys’ owner Jerry Jones continues to profess his love for RB Ezekiel Elliott, while Tony Pollard continues to put up huge numbers for the Cowboys. Pollard has to stay in fantasy lineups moving forward, as the Cowboys can’t afford to sit him behind Zeke…can they? Pollard will be a starting RB for some NFL team next year, and will be an RB1 in 2023 drafts.

Davante Adams caught 7 balls for 141 yards and 2 TDs, including a game winning TD catch in overtime. The Raiders have largely struggled this season, but they do boast a WR1 in Adams and an RB1 in Josh Jacobs. Adams remains a top 5 WR, both for fantasy purposes and real life.

Every non-Chiefs AFC West team will have recurring nightmares of TE Travis Kelce for quite some time. Kelce teamed up with Mahomes to rip out the Chargers’ hearts on SNF, scoring 3 TDs, including the game winner with less than a minute left. Kelce remains the gold standard at the position.

Analysis: The Cleveland Browns have had a rough season as they wait for QB Deshaun Watson to ultimately join them in Week 13. Despite the team’s struggles, they’ve had a few key fantasy contributors. RB Nick Chubb and WR Amari Cooper are the known commodities, but how about WR Donovan Peoples-Jones? The third year player finally found the end zone this past Sunday against the Bills, catching 5 balls for 61 yards. While this was Peoples-Jones’ first TD of the season, his production has been ongoing for several weeks now. Peoples-Jones has caught at least 4 balls and no less than 50 yards for seven games in a row, with more than 70 receiving yards in five of the seven games. Peoples-Jones’ numbers don’t scream off the page, but these consistent weekly performances offer value for fantasy managers. Peoples-Jones is entrenched as the Browns second starting WR, and his arrow points up as Watson’s return lurks. Consider Peoples-Jones a WR3 / flex option in deeper leagues (12 plus teams), and make a play for the WR if you need help at the position.

Analysis: Last week, we looked at Titans’ WR Nick Westbrook-Ikhine’s week 10 explosion, ultimately concluding that his upcoming performances would be unlikely to be of weekly fantasy relevancy. Part of the reason for the apprehension…more desirable target Treylon Burks. The rookie first round pick from Arkansas has had a fairly quiet start to his NFL career, but you can see the talent oozing through the TV screen. Burks boasts ideal size for a WR, with sticky hands and easy athleticism. You can debate the merits of the Titans’ AJ Brown trade, but the team used the first round pick acquired for Brown on Burks for a reason. Burks registered his first 100 yard receiving game for the Titans this past Sunday, connecting with QB Ryan Tannehill 7 times for 111 yards. Burks also led the team in targets with 8. Scanning the Titans’ pass catching options, Burks comfortably has the highest upside, notably without any real threat to be usurped as the team’s top pass catcher moving forward. As such, expect Burks to continue to become the focal point of the passing game. The Titans’ offense will run through RB Derrick Henry, so temper expectations a bit here for the rookie WR. But Burks has the juice to be an upside WR3 / flex option moving forward.

Let’s take a quick look at a few interesting backfields to see how things have sorted out:

Denver Broncos: The party cleared out in a hurry, as Melvin Gordon was waived by the Broncos for yet another fumble, while Chase Edmonds suffered a multiple week injury. As such, Latavius Murray remains the last RB standing for the Broncos. He’ll be a low end RB2 moving forward.

Kansas City Chiefs:  Clyde Edwards-Helaire has been a non-factor in the Chiefs’ offensive plans for two weeks straight, while rookie Isiah Pacheco has become the guy. Pacheco sits squarely in RB2 territory moving forward, with a nice RB schedule coming up.

Los Angeles Rams:  Shoulder shrug emoji. Cam Akers has worked his way back into the picture, while Kyren Williams has entered the picture. Making way for these two backs, Darrell Henderson has faded into oblivion. Given the status of the Rams’ offensive line, you should not rely on any of these RBs unless desperation kicks in. Akers is a low end flex, with Williams sitting beneath that line.

Atlanta Falcons: Cordarrelle Patterson recently returned from injury to resume lead RB duties for the Falcons. He sits as a low end RB2. With the Falcons’ offense centered around their rushing attack, rookie RB Tyler Allgeier also factors into the fantasy picture as an RB3 / flex option.

* Another tough week on the wire.