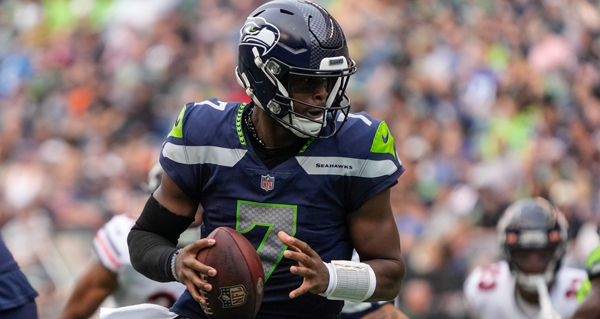 The Buffalo Bills embarrassed a historically proud Pittsburgh Steelers organization this past Sunday, with QB Josh Allen throwing for more than 400 yards and 4 TDs in a blowout. Allen accumulated most of his stats in the first half, so only the unspoken mercy rule kept the stats from getting more crooked. Allen remains the best QB in fantasy.

Bills’ WR Gabriel Davis ascended very high up the sleeper list during drafting season, so high that he eventually lost the sleeper designation by going within the top 25 WRs picked. Davis had been battling an ankle injury the past few weeks, limiting his performance and hurting his fantasy managers. For those of you who sat him in week 5…my condolences! Davis connected with Josh Allen for 98 and 62 yard TD passes, buoying his stat line to 171 yards and 2 TDs. Confidence in Davis has been restored as a weekly start WR2.

You should expect at least one Seahawks’ opponent to make the honor roll every week, with Taysom Hill being the recipient of the Hawks’ defensive charity. Hill kept entering the game to run the ball, which the Seahawks knew but couldn’t stop. That level of defensive incompetence leads to 112 rushing yards and 3 TDs for Hill. To further confuse the bumbling defense, Hill threw a pass as well…which led to a 22 yard TD. We’ll take a closer look at Hill below.

Analysis: Perhaps the most surprising story of the 2022 season…Geno Smith’s stellar play as the Seahawks’ QB. Only employees within the Seahawks’ headquarters would have believed that Smith would play at a competent starting-NFL-QB level, given Smith’s struggles in his early years, followed by 6 years of serving as a backup. Well, Smith has not only flashed competency, he’s performed at a Pro Bowl level. That’s right, Geno Smith! The veteran QB threw for 3 TDs and a shade under 300 yards against a tough Saints defense. On the season, Smith has completed 75% of his passes, with a 9 to 2 TD:INT ratio and 8.3 yards per attempt average. Smith’s improvement at QB has staying power, as he’s an accurate thrower who reads defenses well, even if he holds onto the ball too long sometimes (he’s not perfect!). Smith has also meshed well with talented Seahawks’ WRs DK Metcalf and Tyler Lockett. More ammo, game script will provide a tail wind for Smith’s stats going forward, as the Seahawks defense will ensure that the passing game gets lots of work. Understood if you will need more time to accept Smith as a legitimate QB, but you will eventually come around. You should view Smith as a high end QB2 for fantasy purposes, with upside based on matchups.

Analysis: We’re digging a bit deeper here, but that’s necessary with running backs collectively at an all-time low in terms of fantasy impact thus far in a season. The Tampa Bay Bucs entered 2022 as a popular Super Bowl pick, in what’s anticipated to be the GOAT’s final season in the NFL. As for the Bucs’ running game, playoff Lenny has been the dude over the last few years. Fournette scored two TDs against the Falcons this past Sunday, leading the team in carries (15) and surprisingly, receptions (10). So why are we featuring Rachaad White in this space? While his numbers against the Falcons were rather pedestrian, look beyond the surface and you’ll see a player whose role may be increasing in future weeks. Looking at the snap count, White partook in 31 plays versus 49 for Fournette. Rewind back to week 4, and the snap count favored Fournette only by a 39 to 24 margin. So Fournette remains the primary back for the Bucs, but White’s carved out close to 38% percent of the snaps in which the Bucs have featured an RB the past two weeks. White’s an able pass catcher with a patient, set-up-the-blocks rushing style. The Bucs clearly want to get White more involved in the offense, and on that basis, he’s worth an add in all leagues with 12 plus teams. White remains available in 66% of leagues, per Yahoo – so take a shot on the Bucs’ RB if you need help at the position.

Analysis: The Washington Commanders reside in the cellar in the NFC East, with eyes already turning to 2023 by many in the nation’s capital. While this season has been a downer for the Commanders, we saw the debut of rookie RB Brian Robinson this past Sunday versus the Titans. Robinson was set to take the reigns as the team’s opening day starting RB, only to be shot in an attempted robbery. Thankfully, Robinson did not suffer life threatening injuries, and he remarkably returned to play just six weeks following that incident. With that good news in hand, let’s take a look at the Commanders’ RB situation. Starting with the easy part, JD McKissic has locked in the team’s third down / two minute drill role, leaving Robinson and Gibson to duke it out for carries. Well, this game shows you how little the coaching staff regards Gibson, with Robinson out-carrying him 9 to 3 in Robinson’s first NFL game. The snap count between the two showed a relatively similar split, however, with Gibson outsnapping Robinson by just 1 (19 to 18). Look for Robinson to wrestle away a larger portion of snaps from Gibson moving forward, with McKissic retaining his role as stated above. Robinson should be rostered in all leagues, stashed on benches until we see him wrestle away more snaps from Gibson. Robinson’s time should come sooner rather than later. On that note, Gibson should sit on fantasy benches, with his value arrow pointing downward. McKissic’s only viable in deeper PPR leagues (12 plus teams).

Analysis: The New England Patriots went into battle with their third string QB versus the Detroit Lions, and won the game handily. The Pats ran all over the Lions defense, but they also had no trouble moving the ball through the air when desired. Most of the passing success came via Jakobi Meyers, who caught 7 balls for 111 yards, with one TD. Meyers has only played in three games so far in 2022, but he’s sporting a line of 20 receptions and 261 yards - which presents into a useable fantasy line. Importantly, Meyers has averaged 9 targets per game, with such volume providing a solid floor in games. We’ve got plenty of intel as to how Meyers fits onto the fantasy football field…he’s a high volume, low explosion WR who occasionally finds the end zone. As such, Meyers’ game better fits PPR leagues than standard leagues. If you look at Meyers’ career stats, you’ll notice that he’s had a rough time scoring TDs. Don’t fret, as that’s more due to awful luck than anything else. Meyers profiles as a WR3 / flex in PPR leagues, preferably in leagues with 12 plus teams. He’s rostered in roughly half of all leagues, so place a claim in for the Patriots’ top WR if you need help at the position.

Analysis: We inevitably write in detail about Taysom Hill once a year, as he always has a few games where he tilts a matchup…assuming he’s in a lineup. The first of any such games came in week 5 against a hapless Seahawks’ defense, who as mentioned at the top, knew that Hill would run when in the game, and couldn’t help but let him rack up yards and TDs. Hill put up in the neighborhood of 33 fantasy points in PPR leagues this past Sunday, with 4 total TDs and more than 100 yards rushing. Looking at Hill’s performance over the season, he’s scored at least one TD in three of the four games in which he’s played, with two games of at least 80 yards rushing. Because Hill’s not a volume rusher, you’re facing a boom or bust performance when he’s in your lineup. So how should you value Hill in fantasy leagues? Tight end remains a relatively week position except for an elite few, so there’s no issue with deploying Hill weekly if you don’t have a top 6 or so tight end. Hill has the same downside of players outside that group, but with much better upside. Just know that you’ll have weeks where Hill puts up 2-3 fantasy points, and others when he’ll find the end zone and earn his keep. In case you need a TE and Hill remains available, put a claim in for him now. He should be rostered in all leagues.