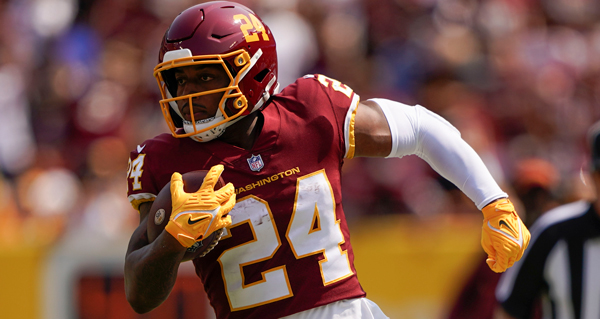 We covered Patrick Mahomes’ slump a few weeks back, stating emphatically not to panic. Alas, Mahomes hung crooked numbers against the Raiders, crossing the 400 yard passing threshold while connecting on 5 TD tosses. Mahomes conservatively remains a top 3 fantasy QB, and any buy-low window has slammed shut.

Packers’ star RB Aaron Jones suffered an MCL injury against the Seahawks, which likely keeps him out for 1-2 weeks. The Packers tapped into their depth, with AJ Dillon rising to the occasion. Dillon scored the game’s only two TDs, while also contributing 62 receiving yards to help wrap up the win. A priority add in any leagues where Dillon remains available, he will be high end RB2 and a must start as long as Jones remains out.

Stefon Diggs came into the season as a top 3 fantasy WR, but his numbers have lagged a bit. Well, the Diggs we anticipated showed up with a bang against the Jets, hauling in 8 passes for 162 yards and a TD. Diggs remains excellent and a fixture in fantasy lineups.

The ascension of rookie QB Mac Jones plus the absence of fellow TE Jonnu Smith made Hunter Henry a solid play versus the Browns. Henry found the end zone twice, leading the pack at TE this week. Henry’s a high end TE2 in most weeks, lacking enough targets to merit weekly TE1 consideration.

Analysis: The Patriots faced uncertainty at RB as the days ticked closer to Sunday, with both starter Damien Harris and top backup Rhamondre Stevenson questionable to play. News eventually trickled in that Harris was out and Stevens in. If you were one of the managers with the cahones to put your fantasy team in the hands of Bill Belichick by starting Stevenson, take a bow. The Browns will be having nightmares about Stevenson, as he rushed for the century mark while scoring two TDs in a rout. The Patriots offense has come on as of late, with rookie QB Mac Jones showing he belongs, and the Pats establishing proficiency in both the pass and the run. Stevenson is a classic run-between-the-tackles RB, with a bruiser type profile. He's clearly a talented RB, but once Harris returns – which could be a soon as next week – how will the Patriots’ backfield shake out? Expect Harris to remain the lead back, although Stevenson has shown that the team needs to find him carries as well. Neither Harris nor Stevenson factor much into the passing game, so Stevenson’s value is limited to games when Harris sits. Stevenson should be rostered in all leagues, but temper expectations for him…just due to opportunity. He’s an RB2 in any games with Harris out, but merely a handcuff otherwise. [Postscript: Bill Belichick makes a fool out of all of us. TNF showed us that both Harris and Stevenson will be fantasy worthy starters moving forward. Both Harris and Stevenson should be on the RB2/flex border, with more value in standard leagues.]

Analysis: Washington Football Team had a breakout rookie RB in Antonio Gibson in 2020, only for Gibson to have suffered a sophomore slump thus far in 2021. Coming into this past weekend versus the Bucs, Gibson only had one game with 70 plus rushing yards, with 3 rushing TDs over the 8 game period. Gibson had been dealing with a shin injury, but it was difficult to ascertain to what extent the injury specifically caused his struggles, versus other factors. Things got so bleak on the fantasy side that fellow WFT RB JD McKissic was higher in several week 10 rankings. So what happened this past Sunday against the toughest rushing defense in the league? Gibson found the end zone twice while rushing for 64 yards, as Washington put away the defending champs. Gibson looked like his best self, pushing through for tough yards on several occasions. What should you take away from Sunday’s performance? That Gibson’s injury likely played a larger role in his struggles than anything relating to a decline in skillset. The week 9 bye certainly appeared to help Gibson tremendously. We’ll need more than one game to state this with confidence, but Gibson gave us hope that a return to high end RB2 status could happen over these remaining weeks. Unfortunately Washington faces another tough run defense against the Panthers next week, so don’t freak out if his numbers don’t jump off the page in that matchup. But Gibson should be removed from any benches / dog houses, and expect a rebound in his stats moving forward. How much of a rebound remains to be seen.

Analysis: No injury arguably shook up the NFL world more than Derrick Henry’s broken foot, which will sideline him through at least the regular season. The Titans lost the league’s leading rusher, while the fantasy world lost its most impactful player by far. From a fantasy perspective, the Titans don’t have a handcuff who’ll step in and provide 80 cents on the dollar (a la the Vikings’ Alexander Mattison) or 90-110 cents on the dollar, depending on where you fall on the Cowboys’ Tony Pollard. With Henry out, the Titans have spread the load among three RBs: D’Onta Foreman, Adrian Peterson and Jeremy McNichols. Unfortunately for fantasy purposes, three way timeshares tend to equal zero fantasy worthy players. As posted above, Foreman led the group with 11 carries, while also looking like the most capable runner among the three. In terms of snap count (per PFF), we’ve got Foreman (21), AP (20) and McNichols (16), which falls relatively in line with the carry distribution. Given the data and the eye test, the suggestion here is to drop AP and McNichols, and consider stashing Foreman. Note that Foreman won’t be playable either unless his usage increases, but he’s got the best chance of becoming the guy – he’s the most impactful rusher of the group. So if you want to make a play for Foreman, go ahead and snag him…then wait to see how the carry distribution looks next week. Just note that this is far from a sure thing, so you’re best off not prioritizing Foreman over other RBs in terms of waiver priority.

Analysis: Urban Meyer’s first NFL season has not gone according to plan, but on the bright side, the Jaguars do have a few intriguing pieces on the team. Focusing on the offense, franchise QB Trevor Lawrence is in tow, James Robinson is a stud at RB, and the team has mined an emerging tight end in fifth year player Dan Arnold. The UW-Platteville product has bounced around the NFL, with the Jaguars being his fourth spot. But the Jaguars appear to have unlocked Arnold, as he has developed strong chemistry with Lawrence. This past Sunday’s game versus the Colts marks the third game in a row with Arnold having 60 or more yards receiving. Importantly, Arnold has been targeted no less than 7 times each game, meaning the uptick in yardage has sustainability. Unfortunately, Arnold has yet to find the end zone, but with this level of targets, that will change. On the flip side for Arnold, the Jags don’t have a lot of reliable receiving weapons, so Arnold should continue to be a focus in the passing game. Consider Arnold as a high end TE2, with room to continue his ascent.

With trade talks heating up as deadlines approach in fantasy leagues, let’s run through a key point that’s often overlooked in trade analysis. Here’s the issue for your consideration:

In any potential trade, consider not only the players you’re receiving and trading away, but also which players step into the vacated spots in your lineup post-trade.

This sounds like Captain Obvious level advice. Unfortunately, I receive too many questions from folks who are offered Tom Brady while they already roster Dak Prescott, with the proposed trade depleting their RB corps. So here we are.

Here’s an example illustrating the point, with the same players involved in the trade:

On its face, this is a fair trade. But consider this scenario for Team A:

Did Team A improve here? Not really, as the drop from Travis Kelce to Hunter Henry is substantial, while the team moderately improves at WR from Jerry Jeudy to Chris Godwin. Javonte Williams does improve Team A’s depth as well. But this trade doesn’t make sense for Team A, because any gains made from improvements at WR and RB get swallowed up and then some by the dropoff at TE.

Now consider this scenario for Team B, who makes the exact same trade, but with a slightly different roster:

Here, Team B made a sizeable improvement at WR from Van Jefferson to Chris Godwin, while also adding an RB that will have his share of starts. Also importantly, while the loss of Kelce is significant, Dallas Goedert provides lower end TE1 in his own right. So Team B is in much better position to offset the reduced production at TE, with the gains at WR and RB likely to outpace the TE dropoff.

The example above illustrates how literally the exact same trade offer could make sense for one team and not another. So please keep in mind that proper trade analysis always involves more than just the players changing teams.