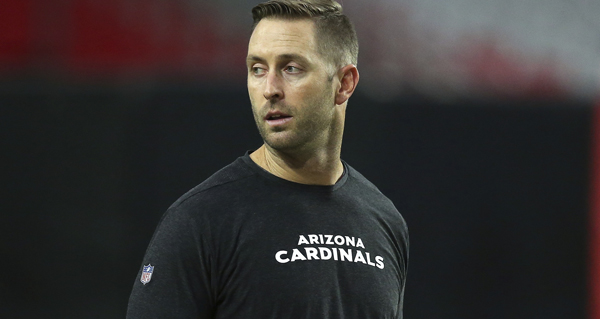 Just $.05 this week due to a few circumstances, including spending Saturday at my daughter’s first 13U AAU basketball tournament that I was absolutely not going to miss.

$.01--After 11 weeks of play there is just one team with fewer than three losses. The Arizona Cardinals improved to 9-2 with a steady 23-13 win over the imploding Seattle Seahawks.

The Cardinals managed to get there despite playing without starting QB Kyler Murray or All-Pro WR DeAndre Hopkins, as well as starting RB Chase Edmonds. In Seattle, no less. Colt McCoy earned his keep once again while filling in for Murray, while the under-the-radar trade for TE Zach Ertz a few weeks ago paid huge dividends. McCoy found Ertz for two TDs on eight receptions, one more touchdown than the Seahawks scattershot offense could manage.

Two other teams failed in their quests to improve to 9-2. Green Bay couldn’t quite seal the deal in a close loss to the rival Minnesota Vikings. Minnesota kicker Greg Joseph nailed his second game-ending field goal of the season to lift the Vikings over the Packers, 34-31, in a game where both teams topped 400 yards on offense. A game, by the way, where Packers kicker Mason Crosby hit the left upright on a 32-yard field goal attempt early in the contest. The little details matter.

Tennessee’s shot at running out to 9-2 resulted in this week’s Any Given Sunday moment. Somehow, someway, the AFC’s best team lost to the AFC’s worst team, at home no less. Houston went into Tennessee and skunked the Titans 22-13 behind two rushing touchdowns from QB Tyrod Taylor. The Texans managed to win despite almost no threat of the forward pass. Taylor passed for just 107 yards on 24 attempts, but that was enough to capitalize upon a very bad day from Titans QB Ryan Tannehill. Even though Houston went 3-and-out on its final 6 drives (one of those resulted in a FG), Tannehill let them off the hook by tossing three INTs in the fourth quarter.

Power polls are always tricky, but in this crazy season, they’re almost impossible. With that in mind, here’s my top 10 through Sunday’s games in Week 11:

3. Titans, who stay up as long as they don’t make miserable efforts a habit

4. Patriots, more on them below…

6. Chiefs, who have won 5 of 6 including victories over the Packers and Cowboys

7. Ravens, because winning ugly is better than losing to bad teams

9. Rams, losers of two in a row since being anointed as The Team To Beat by most pundits

10. Bengals, who could also justifiably be ranked 17th

$.02--Houston’s stunner over Tennessee highlights the battle going on at the other end of the league. The Texans win leaves one team as the clear-cut dregs of the league.

That would be my team, the Detroit Lions. The Lions are still winless after falling short in an unentertaining game in Cleveland, losing 13-10 to the bumbling Browns. Now 0-9-1, Dan Campbell’s Lions are an undermanned mess. Detroit is all the evidence that you need that it’s a passing league. The Lions have run for 400 yards in the last two weeks but scored just 26 points. Throwing for less than 130 yards in regulation over those same two games makes winning nearly impossible.

In that sense, it’s somewhat impressive that the Lions have been outscored by just three points in the tie with Pittsburgh and the loss to Cleveland. Bad quarterback play on the other side (Mason Rudolph last week, Baker Mayfield on Sunday) has certainly helped the Lions hang around, but the tangible growth in the young defensive players shows that Campbell at least made smart choices in (most of his) his assistant coaching hires.

The Lions jumped up 1.5 games on the rest of the league in the race for the No. 1 overall pick in the 2022 NFL draft. I do still firmly believe that Detroit will win one game, and that could very well happen in their Thanksgiving game against the hapless Bears, who have been more inept (sidebar, why can something be inept but there’s no such thing as “ept”?) than these Lions in the last few weeks. But at this point, asking for more than one win is akin to winning the lottery and spending all the winnings on more lottery tickets. We’ll take what we can and be happy with it.

Houston’s win made it a three-horse race for the No. 2 overall pick behind the Lions. The Texans, Jaguars and Jets are all 2-8, and it’s far from resolved how that derby plays out. The Jets still play both teams, and round two of the Texans/Jaguars is also on the schedule. At 3-7 and with a dead man walking in Matt Nagy as head coach, the Bears should probably be included in any battle plans for the top 3, too.

27. Seahawks, and no I don’t see them turning it around this year

$.03--Because sometimes the dirty business side of football is more engaging than the actual on-field action…

Rams owner Stan Kroenke is creating some real issues for commissioner Roger Goodell with his ongoing lawsuits with entities in the city of St. Louis for expenses and lost revenue when he yanked the team out of that city and moved them back to Los Angeles. Kroenke is challenging an indemnification agreement that has seen him pay most of the legal fees that are technically the responsibility of all 32 NFL teams. The net effect (it’s a very complicated set of issues) is that other owners are now set to be on the hooks for tens of millions of dollars in legal fees and potential shared responsibility for the ongoing lawsuits, which the NFL might not win.

Kroenke could potentially reveal a lot of damaging information about the league, and he has some motivation. There were three teams with eyes on moving to Los Angeles at the time (Rams, Raiders, Chargers) and it appears there was some dirty pool going on between the teams in jockeying to relocate. The indemnification agreement stems from the NFL owners approving the relocation. For a more detailed explanation, check out a good article from Sportico.

It’s important to watch how the league, the current owners and Goodell all navigate these muddy waters. Remember, the Bears are fixing to move from downtown Chicago out to the old Arlington race track northwest of the city. At some point soon, one team figures to be moving to London, too. There’s a lot more to moving a franchise than just physically moving the team, and what happens here will help shape how the rest of the relocation sausage gets made.

Michael McCorkle “Mac” Jones and his New England Patriots mates kicked off the weekend with a Thursday night display that should send shudders through the rest of the AFC. Four days after smoking the inconsistent Cleveland Browns 45-7, Jones played another near-perfect game to help lead the Patriots to a 25-0 shutout of the offensively challenged Atlanta Falcons.

Jones completed 22 of his 26 passes, correctly choosing the correct target nearly every time. He only accrued 207 passing yards and got picked off once, but the rookie did all he needed to boost the Patriots over the sleepy Falcons. New England’s surging defense handled the rest, blanking the Falcons and giving up just 11 first downs. Atlanta’s final four possessions all ended in interceptions, including Kyle Van Noy’s pick-six as the cherry on top of a delicious Patriots sundae.

Don’t look now, but Bill Belichick’s Patriots are 7-4 and have won five games in a row. They’ve allowed 13 total points in their last three weeks while scoring 94. Jones is inserting himself into the Offensive Rookie of the Year conversation while the playmaking defense (8 takeaways in those three games) congeals. Jones is 5-0 on the road as a starter and is doing so with a modest collection of wide receivers, all of whom are at least one spot higher on the depth chart in New England than they would be on most NFL rosters. Rumors of the Patriots’ demise have been greatly exaggerated.

For the past few weeks, I’ve been beating the drum that all of the College Football Playoff drama is a completely pointless fabrication. And Saturday once again validated my opinion that you should just ignore all the CFP rankings until the final one, because they truly don’t serve any purpose other than to prop up sports talk radio shows.

All the consternation about Michigan being ranked ahead of Michigan State, a team that beat them head-to-head, worked itself out. Ohio State humiliated the Spartans 49-7, ending any drama about Michigan State being worthy. The Buckeyes will do the same to Michigan next Saturday too, unless Wolverines coach Jim Harbaugh somehow develops a quarterback and also decides to let him throw it--two things he’s proven he cannot do.

If Michigan does happen to beat Ohio State, then the Wolverines will easily qualify. And they would deserve it for holding the best victory of any team in the top 10

All the arguing about Oregon being slotted ahead of Cincinnati, all that was rendered moot too. Oregon lost 38-7 at Utah. The Ducks have two bad losses in the PAC-12, the most bottom-heavy of the major conferences.

It’s still too early to say who might have the best case from the Big 12. Speculating is pointless because the winner of Bedlam (Oklahoma vs. Oklahoma State) isn’t known yet. The winner of that game would then also have to beat Baylor in the Big 12 Championship game. That’s a lot of unknowns to speak about with any certainty. The same is true of Alabama, which might not beat Auburn and certainly cannot be expected to beat No. 1 Georgia in the SEC Championship game.

Then there are the Bearcats. Cincinnati has been adopted by just about everyone as the CFP version of Rudy, the feel-good underdog. But a very good Houston team looms for Luke Fickell’s team in the AAC Championship. A slip up there, and that’s absolutely a possibility, means the countless hours pontificating for “the little guy” were just a colossal waste of energy.

The CFP committee will do its best to rile up the airwaves once again on Tuesday night. Watch it if you like, but understand that nothing that is posted there or said in the heavily moderated Q&A discussion means any more than a presidential pardon for a turkey. Let the games play out first, then commence the arguing!