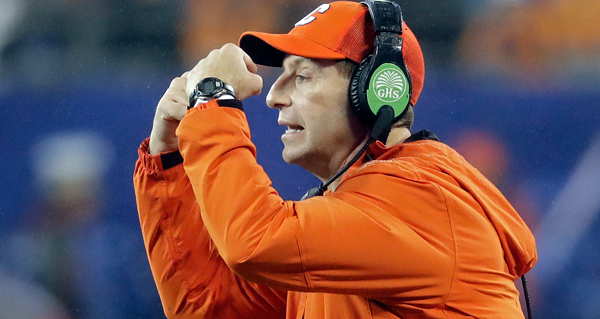 $.01--College football took center stage over the weekend. With the NFL off, it was the college’s time to shine.

Alas, few of the marquee games lived up to the billing. And a few high-profile teams labored to unexpectedly poor results. Those ugly shoes certainly fit Clemson.

Playing against regional rival Georgia, Clemson struggled to do anything against the Bulldogs. Georgia stumbled and bumbled its way to a 10-3 win in one of the least-satisfying offensive displays from two prominent teams in some time. Hyped-up QB D.J. Uiagalelei was sacked seven times, including on a 3-man rush on Clemson’s very first third-down opportunity. That play was emblematic of what was to come for the Tigers.

There seemed to be a real disconnect between the plays being called and the talent’s ability to make those plays happen. Specifically, asking receivers to run longer, more intricate routes and Uiagalelei to hold the ball behind a shaky, overhauled offensive line against a very skilled, seasoned Georgia defense, made no sense. Absolutely credit Georgia and Kirby Smart for attacking with both creativity and positional discipline; the Bulldogs might have the best defense in the nation. But Clemson and Dabo Swinney played into their hands, too.

Clemson’s non-QBs in the backfield managed just 24 rushing yards on 9 carries. Let those young and inexperienced linemen get some confidence--or catch a break and dish out some punishment--by at least trying to run the ball instead of exposing them to that tenacious Georgia defense. Georgia’s offense struggled to get much going against Clemson’s own defense. It was 7-0 at the half, certainly a neutral enough game situation for the Tigers to not completely abandon the run as they did.

With the loss, the ACC appears already eliminated from the CFB Playoff. The only other ACC team given a preseason chance to make it, North Carolina, got bullied by Virginia Tech on Friday night. Miami, which entered the week as the only other ACC team that was ranked, got annihilated by Alabama. Even worse for the conference, Georgia Tech lost at home to Northern Illinois and Duke got upended by Charlotte. Even if Clemson regroups and runs the table, the prestige of the conference wins looks uninspiring.

$.02--Sam Howell entered the weekend as one of the leading candidates to be the No. 1 overall pick in the 2022 NFL draft. But North Carolina’s gunslinger did not look all that impressive in the Tar Heels’ loss to the Hokies.

Howell threw three INTs including a bad misread where he never accounted for a backer dropping in coverage. He didn’t handle pressure as well as hoped, nor was his accuracy as on-point as desired from an NFL evaluation perspective.

Don’t throw Howell and his draft stock in the trash bin just yet, however…

It’s one week. One game does not make a full scouting portfolio. It’s the first week of a new season and Howell was working with a largely new receiving corps, too. Oh by the way, the Hokies have themselves a solid secondary like they seemingly do every year.

That doesn’t mean ignore the suboptimal outing from Howell. It’s a valuable piece of his puzzle, albeit one that isn’t favorable for the third-year starter. There is plenty of time and games to mix in some bigger and better pieces for Howell. The context does need to change a bit, though. Now that he’s had a “bad” game, can Howell put it behind him and bounce back? Was his rough 2021 debut a fluke or a sign of lesser things to come? Don’t overreact and axe him from top-5 draft consideration just yet.

It’s true of several prospects who didn’t have as impressive of a ‘21 debut as expected, or hoped, or demanded. Players do have bad games and there are so many different reasons why. Overreaction is an unfortunate byproduct of the “hot take” turn mainstream sports media has taken. Fight the frothing-at-the-mouth yellers and treat one game with the nuance and broader perspective it deserves.

$.03--The 2021 season is the second year where the NFL will deal with the COVID-19 pandemic looming overhead. The games haven’t even started yet and the impact is already being felt.

When the Dallas Cowboys kick off the season on Thursday night against the defending Super Bowl champion Tampa Bay Buccaneers, they will do so without standout offensive guard Zack Martin. The All-Pro fight guard tested positive for COVID-19 and is forced to miss the game due to the protocols agreed upon by the league and the NFLPA.

Martin is vaccinated, but the positive test means there isn’t time for him to produce five symptom-free days and two consecutive negative tests before Thursday night’s game. One of the Cowboys reserve OL who made the roster, Brandon Knight, will also miss the game due to COVID.

Dallas is the first team to get hit hard by COVID-19 in the regular season. They won’t be the last. In fact, even with a couple of teams at 100 percent vaccination, it’s still quite likely that every single NFL team will play at least one game where multiple important players miss it due to various boxes in the protocols being checked.

The pandemic, while a global problem, has become an acutely political one in America. So has football, and just about everything else, but I digress. It’s important to understand that COVID-19 will indeed play a role in what happens in the NFL in 2021. Even when players and coaches are fully vaxxed, it’s still possible to trigger protocols that force missed games, not to mention bloviating political takes that nobody really wants to hear, often from folks who couldn’t identify the players involved out of a two-person picture lineup. Predicting when and where it raises its hideous head is impossible, too. Be careful in your schadenfreude towards Cowboys fans, because your turn will inevitably come, no matter what team you root for.

$.04--The NFL roster cutdown frenzy capped off the end of last week. There are so many storylines from around the league, but here are a few interesting ones that stood out to me, quickie-style…

--The highest-drafted rookie to get cut was Titans WR Dez Fitzpatrick. He was the No. 109 overall pick. Worse for Tennessee, the team actually traded up to land the Louisville wideout, and one of the picks they traded away to Houston became Nico Collins, who looks like a viable NFL starter sooner than later. Oops.

--The Lions, the team I cover on a daily basis, stunned fantasy football gurus everywhere by cutting WR Breshad Perriman. The move was absolutely zero surprise to anyone who had even mildly paid attention to Detroit all summer. Perriman, whose dad was a good receiver for the Lions in the 90s, once again proved that having blessed athletic traits doesn’t mean much if the passion for football or attention to detail isn’t there. And it absolutely is not with Perriman. The Chicago Bears, with whom Perriman signed on Monday, will become the seventh team in six years to learn that lesson the hard way.

--I expected more trades during the roster cutdowns than we saw. There were a few minor deals, but teams overwhelmingly passed on sacrificing future draft capital for players who project at the bottom of their rosters. Particularly with vested veterans, it’s much more advantageous for a team to just let the player hit the open market instead of taking on their old contract.

--The most surprising cut for me was Washington dumping starting slot CB Jimmy Moreland. One of the NFL’s better agitators at his position, Moreland was waived with injury designation, but his injury is a thigh bruise that might not even have sidelined him for Week 1. Even stranger, nobody claimed the talented young Moreland off waivers. There’s more to the story here to watch for because Moreland can flat-out play a lot better than a lot of corners who made rosters around the league. Maybe someone (Chicago or Carolina, to name two) should have traded for Moreland…

$.05--This week will mark the 20th anniversary of 9/11. It’s one of the most important days in American history, arguably the most important in terms of long-term impact on society for most Americans who are alive and have enough lucidity to recall it.

There will be countless rehashings this week leading up to the anniversary date. As is the case (and noted above), many will be used by narcissistic do-nothings on both sides of the aisle to score political “points” with sycophantic followers who proudly wear their blinders. And that’s incredibly sad and disappointing.

A lot of very good people lost their lives that day for no other reason than they showed up to work. They weren’t soldiers or proselytizers. They were the very definition of innocent victims, simply in the wrong place at the wrong time on a horrible day for our great nation. I didn’t personally know anyone who died directly on 9/11, but it still profoundly impacted me. Just writing about it triggers some emotions that are painful to relive.

I encourage my fellow Americans to honor the enormity of the 9/11 anniversary with dignity and solemnity. It deserves those sentiments. The thousands of people who died deserve it. I will honor the day by listening to “Sacrificed Sons” by Dream Theater, a rousing tribute from a New York-based band about that fatefully tragic day. I will quietly reflect on how fundamentally different our nation is now because of that day. I will certainly shed some tears. I hope America remembers with the spirit that 9/11 deserves and that it can help heal us, if only for a day.