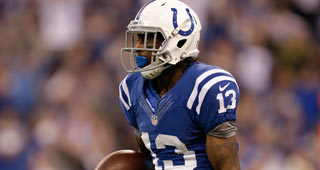 Through 13 games, Green Bay Packers’ QB Aaron Rodgers sits at 39 TDs with only 4 INTs. After three years of posting relatively modest stats, Rodgers has returned to his all world ways. He takes top honors at QB this week with 3 TD tosses, along with a fourth score via the ground.

Speaking of domination, all hail King Henry! Titans’ RB Derrick Henry made mince meat of the meek Jaguars’ defense, crossing the 200 yard threshold while scoring 2 TDs. Henry has an outside shot at a 2,000 yard season – he’ll need to average 156 yards per game over the remaining three contests. A tall order, but don’t put it past the league’s leading rusher.

The Kansas City Chiefs boast an unfair amount of weaponry, starting with QB Patrick Mahomes. While he had one of his tougher games this past week against the Dolphins, speedy WR Tyreek Hill still managed to take the crown as this week’s top producing fantasy WR, with both a rushing TD and a receiving TD. So just how unfair are the Chiefs? Well…

Hill’s teammate Travis Kelce led all tight ends in week 14, as he has done in almost half of this season’s games! The dropoff from Kelce to the league’s second highest scoring TE for the season, Darren Waller, equals somewhere between 4-6 points per game, depending on your scoring system. That’s huge! Kelce’s in the midst of the one of the most dominant tight end seasons in the league’s history.

Analysis: Carson Wentz has struggled mightily during the 2020 season, to the point where the Eagles wisely decided to start rookie QB Jalen Hurts against the Saints. Might as well see what Hurts can do, even if the Saints present a tough matchup. Well, Hurts aced his first test, leading the Eagles to a 24-21 win against the (at-the-time) top seed in the NFC. Hurts played conservatively as a passer, but made good decisions and key throws when necessary. Of particular interest from a fantasy perspective, Hurts crossed the century mark as a rusher with 106 yards. Given where Hurts sits in his current passer development (still early), plus the lack of great weaponry for the Eagles in the passing game, expect the offensive game plan to continue to heavily include the ground game. It will take a few weeks for teams to develop a solid book on defending Hurts, so there’s a window here for you to capitalize with Hurts at QB in case you need help at the position. The Eagles play the Arizona Cardinals next week, making that a nice matchup in which to deploy Hurts. He’ll be a high end QB2, meaning you shouldn’t sit a well established weekly starter (i.e. Aaron Rodgers). But if you’ve been playing the QB carousel based on matchups, Hurts can help you.

Analysis: Jonathan Taylor has had an up-and-down rookie season, but he’s trending the right direction as the NFL’s regular season winds down. Taylor failed to snag the starting RB job at the onset of the season, and then failed to seize control of the job once Marlon Mack was sidelined. Instead, the job rotated among the committee of Taylor, Nyheim Hines and Jordan Wilkins. Well, the rotation amounts to a thing of the past. Taylor ran roughshed against the Las Vegas Raiders this past Sunday, finding the end zone twice while accumulating 150 rushing yards. The Taylor we witnessed on Sunday is who the Colts thought they were drafting, and now he’s finally arrived. Taylor has strung together three strong games in a row, with two 90 plus yard efforts prior to this game. Not surprisingly, Taylor dominated the carries against the Raiders as well with his 20, while Hines had 7 and Wilkins only 1. Moving forward, Taylor has secured must start status as an RB1. For those of you who have already started scouting for next season, move Taylor up your draft boards as well – he’ll be a first round pick in most leagues.

Analysis: TY Hilton has been the Colts’ primary weapon in the passing game for the last several years. With the Colts in transition since franchise QB Andrew Luck unexpectedly retired, it appeared that a changing of the guard was set to take place at WR as well. Hilton’s stats fell off considerably once Luck retired, with only 501 receiving yards and 5 TDs over 10 games in 2019. While these are respectable numbers, Hilton was routinely around the 1,200 yard mark for several seasons. The first 9 games of 2020 looked to follow much of the same script, with Hilton posting an average of just 36 receiving yards per contest and 3 targets per game, while failing to find the end zone. The light switch has turned on over the last three games, however, to the tune of the following:

These numbers look like the TY Hilton of old. QB Philip Rivers clearly has gained comfort with Hilton as the season has progressed, and the Colts offense has been firing on all cylinders. The Colts face the Texans next week, whom Mitch Trubisky shredded this past Sunday. Hilton remains available in 27% of leagues per Yahoo, and he should be picked up wherever available. He will be a high end flex play next week, so be ready to get him into your lineups.

Analysis: You may be wondering why Denver Broncos wide receiver Tim Patrick gets featured here, while teammate Ken Hamler had 86 receiving yards and 2 TDs? Well, Patrick has more staying power over the next few weeks, while Hamler is purely a boom or bust play. Patrick has quietly strung together a solid season, with 8 games (out of 12) with 10 or more points in PPR leagues, including 5 different games with TDs and 3 games with 100 or more yards receiving. Despite a heavy run script against the Carolina Panthers, Patrick tied for the team lead with 5 targets. So he’s an important, trusted target for QB Drew Lock, and the targets and yards will increase as the game scripts change. Look no further than to next week, with the Broncos facing the Buffalo Bills. Facing that high scoring offense, the Broncos will be forced to throw the ball a lot more in order to stay in the game – or otherwise to catch up. The Chargers and the Raiders follow the Bills on the schedule, so if you need a WR, Patrick can help you in deeper leagues (12 plus teams), ideally PPR leagues.

Each week wel throw out potential free agent pickups from each position for deeper leagues, in each case 1) someone who has NOT been featured above, and 2) a player available in more than 50% of leagues.