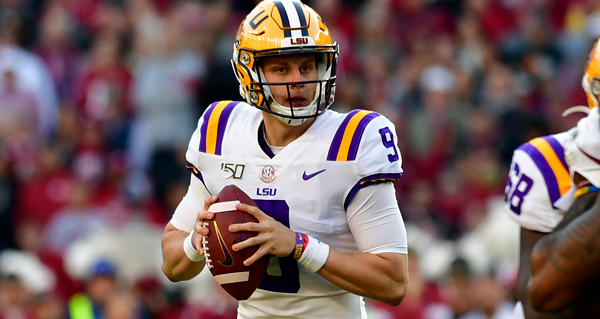 Some 2020 NFL Draft notes, observations and thoughts after a week in Mobile for the Senior Bowl, and my spot on radio row with the Detroit Lions Podcast, as well as various interactions in the hotels and nightlife establishments.

It’s legit. Joe Burrow will be the No. 1 pick by the Cincinnati Bengals, and it’s hard to find anyone--be it media, team sources or other college players and former teammates at both LSU and Ohio State--who doesn’t believe it’s a great idea.

The belief in Burrow’s poise, football IQ and natural leadership is similar to what surrounded Andrew Luck back in the 2012 NFL Draft. Luck is widely regarded as the most “sure-thing” QB prospect of the 21st century. Burrow’s run in 2019 at LSU trumps Luck at Stanford in the eyes of many evaluators. That includes an AFC West scout I ran into on radio row who told myself and my podcast co-hosts off-air,

“Burrow is a fiercer competitor. Luck was too (expletive) nice after plays, man. Burrow, he want (sic) your ass to feel it.”

I wrote about this last week as a prediction for the 2020 NFL Draft. After getting feedback on that piece, listening to NFL personnel discuss Herbert and feeling the skepticism around Tua Tagovailoa’s hip and ankle surgeries, I’m more convinced I’ll be right.

Herbert won the Senior Bowl MVP, building off a strong performance in practices. He showed excellent arm strength, the ability to throw from multiple platforms and legit speed when given a chance to run.

Physically, Herbert is straight out of QB central casting at 6-foot-6, 227 pounds, big hands, long arms and a winning smile (don’t laugh, that matters to some). At Oregon, he showed he’s an outstanding athlete and can make any throw to any place on the field. Many mock drafts from the past summer featured Herbert at No. 1 overall, and he didn’t do anything on the field in 2019 to dissuade his case; Burrow outshined him and Tagovailoa got more hype, that’s all.

Most people project Tagovailoa to be selected above Herbert. It’s too early to know, but it wouldn’t surprise me if Herbert elevated himself back up enough this past week to wind up being QB2. Being healthy matters most, and let’s just summate the week by stating a very general but broadly applicable declaration that echoed throughout Mobile all week: The NFL is a lot more skeptical about Tua’s health and ability to stay on the field than the draft media or the fans are. I expected it, but the degree to which it was validated caught me by surprise.

Just so it’s out there for the record: The film grades will not be close for me--Tua is a much better prospect based on game film from the last two seasons than Justin Herbert.

I need to watch more of Houston OT Josh Jones

Jones was one of the most impressive prospects throughout the week in the practices. His length, his balance and the ease at which he moved his feet, hips and shoulders in coordination really stood out. Jones successfully turned away all different types of rushers at his left tackle spot.

I came to Mobile with a preliminary thought of Jones being a 3rd or 4th rounder. That was based on watching two Houston Cougars games last fall and tape of another game on Monday before practices started. What he demonstrated in Senior Bowl week is a player who merits top-40 overall consideration, and I expect we will see many mock drafts coming with Jones in the first round. My initial views of him didn’t reflect that, but I probably should have paid closer attention. Off to the film room!

Other players who outperformed my expectations heading into Mobile based off what I’d seen of them during the 2019 season:

Michigan EDGE Josh Uche. He found his role as a stand-up OLB rushing the passer and using his long arms (for his height) and quick hands to make life miserable for opposing blockers. Uche never really had a defined role at Michigan and I had primarily blamed him for that. Based on what I saw and heard in Mobile, the blame shifts off the player. He looks like a viable Day 2 talent with the ability to contribute immediately.

Florida WR Van Jefferson. The most consistent receiver on the South, his footwork and ability to manipulate the corner out of his breaks stood out. He’s also a great blocker, something that stood out on his Gator film.

Temple OC Matt Hennessy, who looks like he can start as a rookie if a team doesn’t mind his lack of anchor power. He reminds me some of criminally underappreciated Browns center JC Tretter.

Dayton TE Adam Trautman. I saw one Dayton game and watched one cut-up of Trautman on the plane to New Orleans (I fly to NOLA and drive to Mobile, which has possibly the most inaccessible airport in America). I knew he could release off the line and body catch. I didn’t expect him to fare so well in pass protection drills or at making athletic catches outside his core area. His hard-charging personality won him some points with the Lions coaching staff on the North, too.

LSU OL Lloyd Cushenberry. The most consistent interior lineman on either squad, he packs a solid punch and uses his lower-body strength very well. He appeared to have quicker feet in person than on LSU game tape. He’s a Day 2 prospect.

On personal rankings, I’m higher than most draft media on these players:

Minnesota safety Antoine Winfield Jr., the best safety in this class on my board as long as he’s healthy. And I like this safety class overall, too...

Michigan State DT Raequan Williams, who I compare to the Giants’ Dalvin Tomlinson

Colorado WR Laviska Shenault, who will be my WR2 in this class behind Alabama’s Jerry Jeudy

Iowa CB Michael Ojemudia, a good fit for a press-man scheme on the outside

The flip side, players I’m less bullish on and will rank lower than the consensus draft media:

Oklahoma WR CeeDee Lamb. Definitely a talented player but I don’t buy into the top-10 overall hype. What does Lamb offer that sets him apart?

Michigan WR Donovan Peoples-Jones. Top-level athlete. Not a draftable talent at wide receiver to me. He could make up for that as a return specialist.