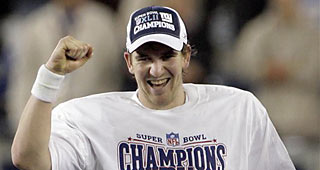 You can’t claim to know anything about Eli Manning. Every accomplishment is festooned with caveats and every debate about his career pretzels itself almost immediately—on the other, other, other, other, other hand. His inner life is completely opaque. He’s never said a single interesting thing to a reporter. From the moment the Peyton’s Little Brother Can Sling It hype seized him, he’s been a curiously magnetic athlete, but it’s hard to say if he has exactly been any good. His face carries a permanent look of being caught unawares, like in 1988 a Sears photographer said smile! while he wasn’t paying attention and when the flashbulb went off his expression just stayed that way for decades. People say he’s a nice guy, and that tracks. What do you have to say about your cousin’s fiancé, whom you talked to for seven minutes at Thanksgiving without learning anything of consequence? I dunno, seems like a nice guy.

Those two Super Bowl runs were aberrations. Not in the sense that Eli became some unrecognizably superior version of himself—he constructed a lot of impressive fourth quarter drives over the course of his career; he made a lot of great throws—but it was like a coin coming up heads 15 times in a row. You start to wonder if the coin is somehow broken, or if perhaps reality is. He only threw one interception in each of those four-game spans. He led the league in interceptions three separate times, including a 27-pick season at age 32. If there is an image of Eli that endures, it’s him overcoming the nigh undefeatable Patriots and, in a moment of sartorial hysteria, pulling his Super Bowl champ t-shirt on over his pads so he looked like Hayseed David Byrne. If there’s another one, it’s him cursing at himself—like: shoot, I just missed it—after sailing the ball several nautical miles over the head of his intended target and directly into the arms of a slightly confounded safety.

Actually, on second thought, both the NFC Championship games are quintessentially Eli-esque. Against Green Bay in 2008, in temperatures that would make a polar bear beg for a space heater, he threw the ball into the teeth of a talented and singularly physical Packers secondary 40 times, completing 21 passes. Against the 49ers in 2012, he threw it 58 times for 316 yards and was continually rocked by the best defensive front in the league. The stats don’t explain it well; you had to watch the games to understand that these were actually pretty phenomenal performances. If Eli had an extraordinary strength, it was a certain psychological numbness. He didn’t ever adjust his approach, or benefit or suffer from what had occurred on the previous drive. He simply got the playcall, set up his blockers, and went with god. In other words, he was perfectly suited to drop back over and over in Lambeau, the ball threatening to shatter in his hands, and against a Niners defense that was maiming him on every other down, because Eli figured that if he kept at it—and changed nothing—he would eventually come out on top. Turns out he was right.

The rest of his career, which is officially and mercifully coming to a close on Friday, was psychedelic variance. You can point to individual seasons in which Eli was, say, roughly the eight-best quarterback in the league, or the 15th-best, but that wouldn’t accurately describe what he did on the field, which was like watching a three-hour movie composed entirely of several minute snippets from the cable edits of other movies, including the odd Centrum Silver commercial. Tucking into an Eli Manning performance was giving yourself over to an experience that was guaranteed only to be uneven. Clever reads, beautiful sideline strikes, airmailed checkdowns, sack-fumbles that perhaps literally happened in slow-motion. It was all in play, on every play. Cause was cleaved fully from effect. Stuff just happened, to and around Eli. His ability to control any of it was largely theoretical.

He’s going to receive an absurdly dignified send-off from the Giants, because over the years and for no real reason besides his aversion to controversy and highly sunburnable complexion, Eli has acquired a certain statesmanlike quality in the minds of cops and vice principals the tri-state area over. This is obviously hilarious—insert photo of Eli gawping at floodwaters here—but plenty legible if you consider the avant garde fustiness of The New York Football Giants™, an organization deeply committed to things that aren’t really substantial enough to qualify as values. You get the sense John Mara has firm ideas about the number of shirts any man should own, and if you go one pale blue oxford over that figure, you’re dead to him. Eli has the correct number of shirts. He has never felt the need to “get all political.” He has a wife and four children, and it seems to Mara, in some ineffable way, as if he’s the first human being to ever accomplish that feat. That stolid and certain misapprehension is why Eli’s been the Giants’ starting quarterback for about four or five years longer than he probably should have. They’re definitely going to find a room in a facility somewhere and name it after him.

To entomb Eli in this sanctity is to diminish him—he’s a much more appealing figure when he’s playing flip cup after hours with his brotégé as opposed to ironing his khakis in Mara’s daydreams—but he won’t argue against it, because he doesn’t care. He was asked recently if he might go into coaching and laughed it off in a manner suggesting that after he gives his farewell presser, he’s going to disappear from public life for a while, slip serenely beneath the waterline of an unremarkable middle American dadliness that he’s been resting atop his entire adult life, kept barely buoyant by the fact that he was an extremely famous football player in the biggest market in the country.

It can be confidently said that Eli Manning enjoyed quarterbacking the Giants, and he went about it in his own stressful, incongruent, and sometimes wildly successful fashion. This is where we begin to run out of facts, and the picture of him goes sepia or every color all at once, depending on where you’re standing. Is that a smile or a grimace? No, no. It looks a lot more like shimmering confusion.

Colin McGowan is a contributing writer to RealGM.