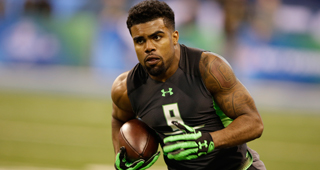 One final round of notes on some players and some ideas on where they might go as we are now in the final days of 2016 NFL Draft week.

--Don’t expect the trading to subside. The Cleveland Browns are fairly publicly shopping the No. 8 pick they acquired from Philadelphia. Various rumors have Miami and Tennessee interested in moving up to select Ohio State RB Ezekiel Elliott. I’m told the Browns would also lean in Elliott’s direction but would prefer to upgrade the porous defense here and add offensive weapons for Robert Griffin in the next few picks. The long and short of it? Put Elliott at No. 8 in your mock draft, but don’t be married to Cleveland picking there.

--Laremy Tunsil could wind up sliding a lot further than anticipated. Three weeks ago he was the consensus No. 1 overall pick, but now it’s a near certainty he’s not one of the first four picks. The earliest Tunsil will come off the board is No. 5 to Jacksonville, but they might opt in a different direction. So too could Baltimore at No. 6; those rumors about Ronnie Stanley being the first tackle selected are directly related to this very choice for Ozzie Newsome and the Ravens. It’s hard to see San Francisco at 7 or Cleveland at 8 pulling the trigger as the best offensive player on both those rosters right now plays left tackle. Could Tunsil really fall to Tampa Bay at 9 or even the Giants at 10? It’s not as preposterous as you might think. The off-field concerns are greater than the public is aware.

--Washington signing Josh Norman shakes things up in their realm of the draft. Currently slotted at No. 21, the Skins just plugged their biggest hole. GM Scot McCloughan is noted and even on the record for desiring as many picks as possible. I’ve been told Washington is marketing the pick as the spot to be to land the wideout of choice to WR-needy teams like Minnesota, Cincinnati and Cleveland (at No. 32) and would happily slide back. Two players I know the Skins have liked during the scouting process who make a lot of sense if they can slide back: Louisiana Tech DT Vernon Butler and Alabama C Ryan Kelly. Both those players seem a better value fit at 24 or 32 with an added Day Two pick than at 21.

--If the Skins, or any other team, want the Alabama center, they’re going to need to get in front of the Arizona Cardinals. It’s perhaps the worst-kept secret in draft media this year that GM Steve Keim and the Cardinals brain trust highly covets Ryan Kelly. Of course they could just be playing all of us on a very long con…

--Other picks to feel as confident as possible about in your final mock draft:

--In my 32 Fearless Predictions I mentioned Cardale Jones as the fifth 1st-round QB. I’m going to revise that here. If there is a fifth QB in the first round after Goff, Wentz, Lynch and Cook (in that order) it’s most apt to be Stanford’s Kevin Hogan. Former Bears GM Greg Gabriel mentioned this on Twitter recently and I pressed back a bit. Almost immediately I got a message from a high-ranking NFL team source who told me to trust Mr. Gabriel on this one. It might not happen in the first round, but expect Hogan in the first half of the second round. I know Gabriel does and he’s not alone.

--Myles Jack remains the great mystery. From what I’ve gathered from numerous sources, both public and private, is that every team views him differently. And that’s not just about his troublesome knee, which has been diagnosed as a chondral defect that indicates a lack of cartilage, either; some teams view him as a safety, others as an outside back and still some as a middle linebacker. Teams that will not take Jack regardless of where they think he fits positionally include Dallas, Detroit and Tampa Bay. My best guess as to his landing spot? New Orleans at 12 if he doesn’t go to San Francisco at 7. But that’s just a guess.

At this point I’m rushing to get a working knowledge of as many prospects as possible, so I’m glued to lesser-known and small-school prospects who might hear their names called on Saturday or wind up being priority free agents for my team (I’m a Lions fan). Some skinny notes on a few guys who I’ve watched recently:

Tulane OT Arturo Uzdavinis--I watched the Houston/Tulane game primarily to brush up on the Cougars defenders, but Uzdavinis has gotten a little buzz as a deep sleeper so I focused on him as well. I’m glad I did. He’s quite long on the edge at 6’6” with arms over 35” long and he knows how to use them. He exposes his chest too readily but doesn’t have bad feet and can stay engaged even if he loses the initial leverage battle. Uzdavinis is plucky and strong in the shoulders, but not so much in the lower body. I believe he’s draftable, late.

Houston S Trevon Stewart--he’s a playmaker with a real annoying (if you’re the opposing offense) demeanor on the field. Smarter and quicker than I expected from casually watching him in some early-season games, when I kind of wrote him off for being too small. He’s definitely small at 5’8 1/2” and 190 pounds, but Stewart is constantly getting his nose dirty and seems quite instinctive in coverage. I like him as a sub-package safety who can help against spread formations and on special teams. Worth a 5th round pick to me.

Harvard TE Ben Braunecker--I finally got to see two games of the Combine stud. The best-in-class athleticism definitely shows. So does his rawness with his hands, both as a blocker and (more so) as a receiver. He’s oddly passive with the ball in the air and five of the six catches I saw were traps against his pads when he could have gotten away with clean hands. The Ivy League plays better football than you might think, but even so Braunecker is still facing a big jump in opponent’s athleticism. The team taking him needs to define what role they want him to play. If he’s envisioned as an in-line guy who can also threaten with the chip and release--which is how I would use him--he needs to gain some bulk and work on his blocking technique. If he’s seen as a move or flex TE, the focus must be on developing his footwork off the line and hands at the catch point. Take him in the 6th round and stash him as a rookie.

Harvard OT Anthony Fabiano--Another athletic metrics freak from a school noted for academics, Fabiano suffered a nasty leg injury in the second game I watched (Dartmouth). Somehow he recovered fast enough to put on a show at Harvard’s pro day. He played guard in ’15 but his game befits a left tackle, as Fabiano doesn’t have much pop behind his punch and is more of a mirror/dancer than a people mover. The problem is he’s short for the edge at just 6’3”. Some see him transitioning to center and I can buy that more than guard. For a zone-oriented team he’s worth a seventh-round pick as a versatile reserve lineman.

Toledo DT Orion Jones--I revisited Jones after being tipped off that some teams see the active Rocket tackle as a potential 4th rounder. My initial grade on him from three games in the fall, including once in person, was 5th round so that’s not out of line. Jones is very quick with his hands and plays with a strong football IQ; he understands what the offense is trying to do and how to disrupt that even if he’s not going to make the tackle. Yet his tackling stands out; if he gets a paw on the runner, the play is over. I like him as a 5-technique who can kick into a 3T in an even front and stand by the 5th-round grade.