32 Fearless Predictions For The 2016 NFL Draft 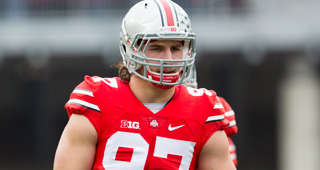 In lieu of yet another mock draft, here are some different sorts of prognostications for the upcoming NFL Draft. These are more fun to read anyways…

1. With the trade between the Rams and Titans, the top two picks will be quarterbacks for the third time in the last five drafts. Carson Wentz and Jared Goff go 1-2. The two teams that draft them will be picking in the top 10 again in 2017 as neither wins more than six games.

2. Every year there is a surprise slider, someone universally projected to go high but winds up dropping much further than seemingly possible. This year that player will be Ohio State DE Joey Bosa. He winds up dropping out of the top-8 after being projected as a top-5 pick--at worst--since last summer.

3. The first wideout taken will be Notre Dame’s Will Fuller, as Daniel Jeremiah and others have intimated. He is my No. 12 receiver and reminds me so much of Troy Williamson; I will laugh heartily when he’s gone in the first 15 picks. And he will be.

4. Fan of a tight end in the first two rounds? You probably aren’t going to like this draft very much. There are few unanimities from scouts from different sources but one common refrain that those of us in the draft media have heard is that this is a dreadful year to need a tight end. The first TE off the board will be Hunter Henry form Arkansas, and he will not be taken in the top 50. He and Ohio State’s Nick Vannett will be the only tight ends taken in the draft’s first two days.

5. There will be two other traded picks in the top 10, and both will involve NFC East teams and quarterbacks. In true crystal ball vagueness, that’s all the detail I can provide. For those who want the gory details, call 1-900-IDUNNO-2 and enter your bank account info and mother’s maiden name.

6. Ohio State’s Ezekiel Elliott will be the only running back taken in the first 50 picks. He’ll go no lower than No. 14 overall, currently Oakland’s pick. There will be a small run on RBs in the 50-75 overall range which includes Derrick Henry, Kenneth Dixon and Devontae Booker in that order.

7. The first player selected who wasn’t invited to the Combine will be Middle Tennessee State safety Kevin Byard, and he will be picked before the end of the third round.

8. Baylor CB Xavien Howard will be the surprise first-round crasher, as one NFL team will fall in love with his length and speed. It will happen between 24-30 overall.

9. Sticking with Baylor, defensive end Shawn Oakman was widely projected (though not ranked) as a top 10 overall pick last summer. After another underwhelming campaign and inferior-than-expected athletic testing, he was already on thin draft ice. A recent rape allegation is the final straw, and Oakman--innocent or not--will not be drafted.

10. There will be five quarterbacks in the first round. In order: Carson Wentz, Jared Goff, Paxton Lynch, Connor Cook and Cardale Jones, who will be the No. 31 overall pick as a team desires to get that fifth contract year instead of waiting one pick and just getting four. I don’t think Denver will be the team picking there, but the Broncos winding up with Cook would not surprise me at all.

11. Friday, which features the second and third rounds, will be rife with trades as teams target specific players. At least 12 picks from 35 to 65 will be dealt, most for little more than a late-round pick or two or a pick from the corresponding round in 2017.

12. The first non-FBS player chosen will be Carson Wentz, but two other FCS-level players will crack the top 40. South Carolina State defensive tackle Javon Hargrave and Eastern Kentucky edge rusher Noah Spence will both make it. Hargrave’s selection will make Mike Mayock wax poetic about another man’s plump ass for a good 10 minutes.

13. Both Utah punter Tom Hackett and Florida State kicker Roberto Aguayo will be drafted before the end of the fourth round. I’ll take that one further: Hackett and Aguayo will appear in more Pro Bowls than all the QBs in this class combined when all is said and done.

14. At least one member of the national NFL media, likely Jason LaCanfora, will enrage social media by tipping the picks a few seconds before the picks are announced in Chicago. He will lose more than 5,000 Twitter followers as a result.

15. Notre Dame linebacker Jaylon Smith, who would have been a legit contender for the No. 1 overall pick if not for his devastating knee injury, will be the No. 80 overall pick to the Buffalo Bills. He will not play in 2016.

16. San Francisco will deal embittered quarterback Colin Kaepernick to the Dallas Cowboys for a pair of fourth-round picks, one this year and one in 2017. Kaepernick will agree to redo his deal to make it work, realizing some millions are better than none.

17. Arizona linebacker Scooby Wright will be in the “Top-5 available players” crawl on ESPN’s draft coverage for more than 70 picks.

18. The spirit of Bill Polian lingers for the Indianapolis Colts. Polian once drafted three centers in the same draft as GM of the Colts despite already having Pro Bowler Jeff Saturday on the roster. This year, GM Ryan Grigson will draft three offensive tackles. None will be in the first round however. My early stab: LeRaven Clark in the 2nd, Joe Haeg in the 4th and Willie Beavers in the 6th.

19. Even if it’s akin comparing a cucumber salad to a plate of bacon, the big media pundits will steadfastly only compare black players to other black players and white players only to white players. For the players of mixed race backgrounds, they will fumble around and default to “limited athlete”.

20. The two picks I will have in my final mock draft that I have the most confidence in are Miami taking Florida CB Vernon Hargreaves (thanks to my friend Chris Kouffman showing me the light) at 13 and Atlanta taking Georgia OLB Leonard Floyd at 17.

21. Ohio State will have 11 players drafted in the top 100 picks. Here they are in order of selection:

22. The New England Patriots will not make a single selection at their original draft positions, other than comp picks which cannot be traded. They will trade up, trade down, or simply trade away for a player.

23. Florida safety Keanu Neal will be the final player on the initial list of draft invitees to Chicago to hear his name called. It’s difficult to see Neal, essentially a 6’1”, 210 pound inside linebacker, selected before San Diego picks in the second round.

24. Northwestern will have three fifth-round picks, all taken within 15 slots of one another. Defensive end Dean Lowry, corner Nick VanHoose and “Superback” Dan Vitale will be the tightly clustered Wildcats.

25. Both the Carolina Panthers and Arizona Cardinals will trade out of the first round altogether. The Panthers drop back and select Noah Spence, while the Cardinals fall well back and pluck Alabama center Ryan Kelly as they also recoup the second-round pick they dealt to New England for Chandler Jones.

26. There will be 14 quarterbacks drafted. The last one tabbed will be Jacoby Brissett from North Carolina State in the final 10 picks of the draft. Christian Hackenberg will be taken between Dak Prescott and Brandon Allen at some point in the fourth round.

27. No mock draft written by anyone with more than 10,000 Twitter followers will have more than 11 first-round picks exactly correct. My own will have no more than seven, but I’m primarily concerned with player and slot instead of team and player fits. I will correctly name 27 of the 31 first picks.

28. The Detroit Lions have not taken a quarterback since selecting Matthew Stafford No. 1 overall in 2009. They end the prolonged QB draft drought by selecting Louisiana Tech’s Jeff Driskel in the fifth round. They’ll also bring in a priority free agent right after the draft, perhaps Jake Rudock from Michigan. Both will stick beyond preseason.

30. Five small-school prospects who will be drafted and you can impress your friends by saying so before the Saturday festivities kick off:

31. Attendance over the three days in Chicago will top 250,000 (it was 200,000 in 2015) and attract partisans from every team, but the league will announce shortly after draft weekend that the venue is moving to Los Angeles for 2017.

32. Mr. Irrelevant will be Bowling Green OG Alex Huettel. The Denver Broncos tab the athletic, versatile (he can play center) lineman and he will show enough in camp and preseason to stick on the practice squad, at minimum.