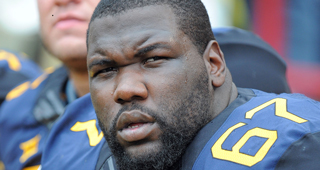 Every year, prospects emerge from the later rounds of the NFL Draft and become surprisingly effective NFL players. The teams who unearth these later draft gems are often the most successful. Seattle found three of the four members of the Legion of Boom in the third day of the draft, while the Packers selected four of their starting five offensive linemen in the fourth round.

The strength of this year’s draft might very well come in that range, the fourth through sixth rounds. There are several players who have the potential to be impact talents at the next level. Here are five I feel fit that billing, as well as a few other names to watch.

If you like brute power and pancakes, you will like Quinton Spain, the brick house of a left guard from West Virginia. Spain is the best people-moving offensive line prospect in this draft. He frequently flattens defenders with outstanding run blocking technique: jolting punch, explosive power from his core through his shoulders, balanced feet and leg drive, determined pugnacity. He’s athletic enough to get out to the second level and blow up would-be tacklers on the move, too.

In fact, his athleticism is extremely underrated…

His agility metrics bested Missouri edge rusher Shane Ray, a man who weights almost 100 pounds less and relies heavily on speed and flexibility. Spain’s game in run blocking is every bit as devastatingly effective as Larry Warford or Gabe Jackson, two recent middle-round picks who have thrived in the NFL.

Alas, Spain has some struggles in pass protection. He overextends too often and plays more tentatively with his freakish power. There are times where he looks remarkably adept in pass pro sets, but consistency is an issue. It’s that inconsistency which will keep Spain from being drafted before about the 5th round.

I have an admitted bias for Spain. He is a Petersburg, VA native, a city where I spent a year teaching at Peabody Middle School. I missed Spain in my 7th grade civics and history class by a year, but I knew some of his family and root hard for anyone to make it from that tough but honest place. Keep an eye on Spain being selected by the Texans, whose GM Rick Smith is a Petersburg native as well.

My first real exposure to Mager came during Shrine Game practices in January. I had seen the Bobcats’ game versus Louisiana-Lafayette during the season and had a few notes but didn’t have a good feel for their left cornerback’s game. What I saw on the practice field at Shorecrest Academy in St. Petersburg really intrigued me.

During the daily sessions, Mager stood out for his plucky physicality and lithe movement skills. He’s not blessed with great size at 5’11” and 201 pounds (his Combine weight, up six pounds from one month earlier), but he’s packed with fast-twitch muscle and great leaping ability. He was able to high-point a ball above 6’6” Darren Waller in a red zone drill, and let everyone around know about it afterwards.

So what keeps Mager from being more highly regarded, aside from playing for a relatively unknown program in the lowest BCS-level conference? For one, he’s a bit of a riverboat gambler at corner.

He plays corner as if he’s going to hit on 17 at the blackjack table with the dealer showing a 6. Mager will overcommit to the first move at times, leaving him vulnerable to faster wideouts with quick breaks and feet. He also only plays the left side, even when no receivers are present on that side of the formation. However, that peculiarity actually highlights his ability to quickly read the play and move in space. Mager can aggressively attack the run, but he also drops quickly into zone and can pick up route and coverage transitions adeptly. His fast feet and quick eyes make him a natural for zone schemes, but he also has the pluckiness and functional strength to play press man.

Mager projects as a 4th or 5th round pick, but don’t be surprised if he winds up emerging as a dramatically superior NFL corner to several who will be drafted well before he hears his name called in Chicago.

Most underexposed prospects hail from smaller schools or play less glamorous positions. Yet here is Jeff Luc, the starting middle linebacker at a program which participated in two BCS bowls in the final five years of that monstrosity’s existence. Heck, Luc was even once a prime recruit to an even bigger program, Florida State.

Luc never really met the hype, and after two underwhelming years he transferred to the Bearcats. His first season in Cincinnati wasn’t a lot better, and expectations for the NFL were all but washed away. He was too stiff, too limited in range and simply a guy who peaked early…they said.

Anyone still saying those things clearly didn’t watch Jeff Luc man the middle for Cincinnati in 2014. Despite playing behind a less-skilled defensive line, moving into the middle full-time proved to be resuscitative for NFL dreams. Luc worked hard at improving his flexibility and lateral agility, shortening his stride and playing more on his toes instead of stiff-legged. Now the sharp instincts and truly awesome power in his 5’11”, 260-pound yoked-up frame became all that much more effective.

Luc posted over 10 tackles per game, many of them bone-rattling in nature. He emerged as a human eraser to runs between the tackles. His forceful blows also proved adept at creating fumbles; Luc forced eight of them in his two years in Cincinnati, including this one in his tour de force 18-tackle performance against eventual national champion Ohio State:

He can do just about anything you want an inside linebacker to do. Blitz, check. Shed the lead block and make the tackle, check. Close with power and speed off-tackle and on screens, check. He checked the natural leadership box during Senior Bowl practices, quickly stepping forward as the dominant presence of the North defense. Luc even somewhat checks the box in short-area pass coverage, which is perhaps his most notable physical development in emerging as a future NFL starter. Teams still won’t want Luc chasing tight ends down the seam or running backs on wheel routes, but that’s true of most inside backers these days.

I envision Luc as an immediate starter inside for a 3-4 defense. He can also man the middle for a 4-3 team, used in a role similar to the way the Lions deployed the similarly-sized Stephen Tulloch last year. He’s the rare case of a prominent recruit who busted, but subsequently reinvented himself by working hard at his flaws. I have no problem with a team like Green Bay or San Diego taking Luc as high as the late second round. I suspect he’ll last at least two rounds beyond that, as way too many folks prematurely wrote him off and closed their minds to his truly impressive athletic renaissance.

There aren’t many legit NFL prospects from the D-III level, but this year there are two: Hobart OL Ali Marpet--a top 100 talent--and Kumerow, a 6’5”, highly productive wideout from one of the top two programs at that level.

If the name sounds familiar, it should. His father Eric was a standout edge rusher at Ohio State and a first-round pick of the Dolphins. Current Buckeye stud D-lineman Joey Bosa, the best player in the 2016 NFL Draft class, is his first cousin. The pedigree certainly helps, but Jake is a viable talent in his own right.

The frame of reference here is a small-school receiver from last year’s draft, Jeff Janis. The Packers selected the Saginaw Valley State standout in the seventh round and he made some noise in the preseason by scoring touchdowns on both his receptions. Green Bay is projecting Janis to be no lower than the 4th wideout in 2015, thanks to his size, speed and increasing development as a route runner.

Expect a similar course of action for Kumerow, who is taller by two inches but ran a 4.5 40 to Janis’ 4.42. Like the D-II star, Kumerow got by at his level mostly on being a superior athletic specimen to the competition. As a result, his route running can be crude and lazy by NFL standards. He does do a great job presenting himself as a target on intermediate routes and in traffic, and there is some change-of-speed slipperiness on downfield routes. Yet he will have to tighten his footwork on breaks and show more explosion coming out of them, too.

Kumerow is a much more natural plucker of the pigskin, blessed with big, soft hands and a much greater functional catch radius than Janis. A late-season ankle injury denied him the exposure of the Shrine Game or Senior Bowl, though he did impress at the NFLPA Bowl practice sessions in front of a much smaller crowd. When I bounced his name off a couple of NFL sources, both replied they thought Kumerow would be a priority free agent instead of being drafted. He’s a long-term investment who will likely spend his rookie season on a practice squad, but Kumerow should prove worth the wait.

I got turned on to Hagen thanks to a persistent Twitter follower who urged me to check him out. I had watched some Liberty tape from 2013 while evaluating cornerback Walt Aikens but honestly didn’t take much note of the safety playing predominately on the opposite side of the formation other than his length.

Hagen immediately stands out by being 6’3” with long, spindly arms. He moves fluidly for a taller safety, a position where too much height can be a detriment to lateral quickness. Instincts in coverage are solid, too. Hagen is patient in reading the quarterback but also quick to see routes develop. He’s even smooth enough to handle playing over the slot with some cushion, as he showed against Bryant where he made a leaping INT while undercutting the slot seam route in man coverage.

In the five games I watched, Hagen consistently demonstrated real fluid athleticism. He’s not blessed with great speed, though the team captain and 2014 FCS All-American covers a lot of ground with his length. The Florida native closes downhill quickly versus the run, taking smart angles and doing a good job of keeping his head and eyes up. In a league where the growing trend is to have two “safeties” instead of a “strong” and “free” safety, Hagen offers that flexibility. He will need to add more functional strength if asked to play in the box a lot, as he’s neither bulky nor a big hitter. He will also overrun the occasional play, including a bad decision against Appalachian State where his overzealousness in attacking the play led to a long touchdown run.

To check out Hagen for yourself, view the Bryant game available on Draft Breakdown. It’s a good microcosm game of his potential as an impact player. He’s not as high-end of a prospect as former teammate Aiken, who was Miami’s fourth-round pick a year ago. Hagen should come off the board in the 5th or 6th round, though the odds are he lasts until the 7th or even goes undrafted.

- Some other later-round prospects I think are undervalued include…