Secondary Play Should Decide Battle Of The Bay's 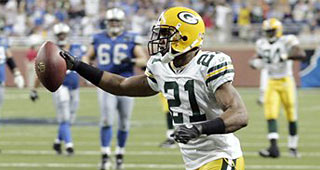 Until seven years ago, the Green Bay/Tampa Bay games were a divisional match up in the Black and Blue NFC Central that was always a heated rivalry. Since then, the battle of the bays has cooled off some, but don?t expect the teams to play nice come Sunday. Green Bay is a paltry 1-5 at Tampa?s Raymond James Stadium and the team is coming off a loss against Dallas that exposed all of the flaws in the young team. Last week Tampa Bay won an emotional comeback OT victory over the Chicago Bears in which their newly anointed starting quarterback Brian Griese threw 67 passes and their secondary was susceptible to big plays. They?re also going to be rallying around their Kicker Matt Bryant, whose 3-month old son died in his sleep this week. How each of these team?s react to adversity is going to determine who comes away with the win. To say these teams are evenly matched is an understatement. Tampa Bay is 7th in the NFL in total offense. Green Bay is 8th. Check out these averages: Both teams are sitting pretty much where they expected to be heading into Week 4: atop their divisions, but with room for improvement. Both teams will be looking to find balance in their offensive game and need to get their running games going. Both teams will be starting a secondary that will be vulnerable and will have the possibility of making or breaking the game based on their ability to prevent big plays. For Tampa Bay, the key will be exploiting the youth and inexperience on Green Bay?s defense. The Buccaneers run a fairly complicated offense that features a lot of movement at the line and crossing patterns in the field. With Charles Woodson?s injured toe and Will Blackmon?s inexperience, the Packers could have a hard time keeping up. Griese?s 67 pass attempts tied him for 5th on the all-time NFL list for most attempts in a game. The Bucs have had a hard time establishing the run, but the return of Guard Joseph Davin should give the rushing attack a boost. The Packers defensive front shouldn?t cause the Buccaneers as many problems as the Bears? did and that should allow Tampa Bay to find the balance they?re desperately searching for on offense. For Green Bay, the Buccaneers defense shouldn?t provide near the problems that Dallas? did last week. Tampa won?t be able to blitz or provide the pass rush that caused so many problems for the Packers last week. The Packers? success will depend on the match up between their wide receivers and Tampa?s secondary. It should be a favorable one for Green Bay and Tampa?s corners will have their hands full trying to prevent the Packers from big plays. If Rodgers can get enough time in the pocket, Donald Driver, Greg Jennings and James Jones will be able to exploit their matches and be open downfield. That?s crucial, because it?s unlikely that this will be the week that Ryan Grant becomes the RB we remember from last season. If the O-line can?t provide Rodgers with pass protection, it will be a long day for the Packers. On the other side of the ball, the Packers veteran DE duo of Kabeer Gbaja-Biamila and Aaron Kampman could have a field day with Tampa?s Tackles Donald Penn and Jeremy Trueblood. If KGB and Kampman perform like they should, Brian Griese could have a long day of getting up off his butt this week.