Dak Prescott To Undergo MRI On Calf, Expects To 'Be Fine' 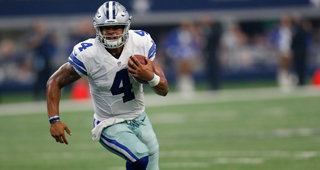 Dak Prescott will undergo an MRI for a right calf injury that he suffered on his touchdown pass to CeeDee Lamb to defeat the New England Patriots in overtime on Sunday.

"Life keeps throwing punches, and I'm going to keep throwing them back," Prescott said. "It's a part of it. It's part of this game. It's a physical game we play. I'll be fine. I've got a lot of confidence in myself, the medical team. I feel good. Obviously, this [the boot] is a precaution.

"But, yeah, I mean, just more so thinking about the touchdown, it doesn't hurt as bad, obviously, when you score and win the game."

Prescott said he "came down funny" after the 35-yard throw that he made while running to the Cowboys' sideline. Had Dallas not scored, Prescott said he could have continued to play.