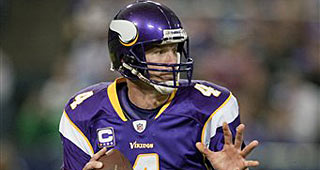 "I know when I turn on a game, I want to watch a game," Favre recently said in an appearance on The Daily Wire. "I want to watch players play and teams win, lose, come from behind. I want to watch all the important parts of the game, not what's going on outside of the game, and I think the general fan feels the same way. ... I can't tell you how many people have said to me, 'I don't watch anymore; it's not about the game anymore.' And I tend to agree."

Favre specifically complained about the issue of kneeling during the national anthem.

"It's really a shame that we’ve come to this," Favre said regarding the kneeling controversy. "Something has to unify us, and I felt like the flag, standing patriotically — because Blacks and whites and Hispanics have fought for this country and died for this country. It's too bad."