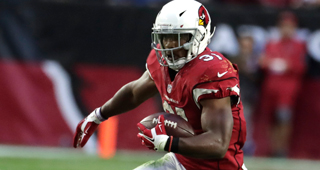 David Johnson's role with the Arizona Cardinals has declined as of late and the running back isn't pleased.

Despite appearing in 11 of the team's 13 games this season, Johnson has played just 48.3 percent of offensive snaps.

Johnson said Wednesday his lack of playing time was an issue he's brought up to the coaching staff and something with which he did not agree.

"Any NFL player, if you're a competitor, if you're not on the field, you're obviously going to be upset about it," he said.