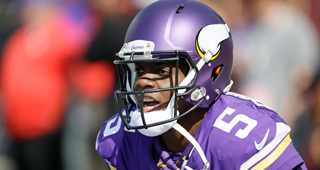 Teddy Bridgewater has not been cleared to participate in practice as he continues to rehab from the knee injury he suffered last Aug. 30.

However, the Minnesota Vikings quarterback has thrown to receivers during individual drills as part of his rehab work. When he'll be able to work at full speed, or plant his left leg and cut, or absorb contact to his knee remains unknown.

"It's just the way he gets the ball out," Laquon Treadwell said. "He's getting the ball out before you're breaking. He tells me he's spent a lot of time studying film. A lot of things he would say he was messing up on, he's looked 10 times better this year. When you go through an injury like that, film is your friend. You've just got to stay hungry and believe in yourself. He'll be fine.

"He looks great -- really great. It's like he was never hurt."