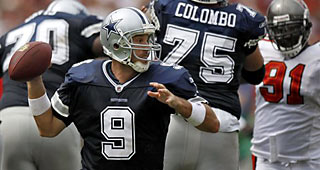 The first game at Cowboys Stadium set an NFL regular-season attendance record with a crowd of 105,121 on Sunday night. The game between the Giants and Cowboys broke the previous mark of 103,467 between Arizona-San Francisco in Mexico City in 2005. The stadium has 75,000 seats, but the crowd on Sunday included up to 30,000 fans in standing-room party plazas.