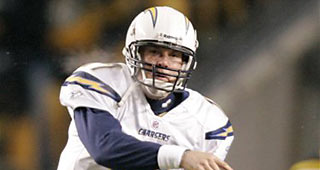 Now that Eli Manning and Ben Roethlisberger have agreed to long-term deals, Philip Rivers is the only quarterback of the 2004 draft class without a long-term deal. Manning and the Giants agreed on a six-year extension worth $97.5 million, with $35 million in virtually guaranteed money. With Roethlisberger signed an eight-year, $102 million ($36 million guaranteed) contract last year. Chargers general manager A.J. Smith said Wednesday, ?We don't discuss contracts. If we have anything regarding Philip, we'll let you know immediately.? Both Rivers and the Chargers have suggested that they would wait until Manning agreed to his deal with the Giants before they discussed a long-term pact.