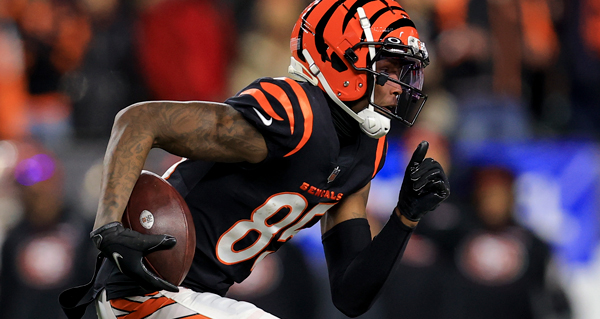 Take a bow, the Cincinnati Bengals! QB Joe Burrow spun the fourth most passing yards in a game in NFL history versus the Ravens, with 525 yards and 4 TDs in a romp against the Baltimore Ravens. Joe Cool has positioned himself to be a fantasy QB1 for years to come, and will hover around the top 5 QBs on draft boards next season.

Damien Harris had the RB position all to himself against the Buffalo Bills with Rhamondre Stevenson out on the COVID-list, and Harris found the end zone thrice while crossing the 100 yard threshold. The Patriots have two starting caliber RBs, each of whom would be a comfortable top 15 fantasy RB if not for the other’s presence. Harris will return to RB3 / flex status, as will Stevenson, upon Stevenson’s likely return next week.

Bengals’ star WR Tee Higgins was on the receiving end of 194 of Burrow’s 525 yards, taking top honors at the WR position for the week. Higgins has quietly become the Bengals’ most reliable WR, with a reasonable debate brewing as to whether he or Ja’Marr Chase is the team’s top pass catcher. We’ll take a closer look at Higgins’ ascent below.

Whether he’s catching passes from Lamar Jackson, Tyler Huntley or Josh Johnson, TE Mark Andrews produces. This past Sunday, the Ravens’ superstar caught 8 balls for 125 yards and a TD, doing his darndest to keep the Ravens afloat versus the Bengals. Andrew remains a top 3 option at TE…regardless of who lines up at QB.

Analysis: The Bucs’ Ronald Jones entered the season in a timeshare with Leonard Fournette as the team’s lead RBs, but he soon found the bench as Fournette outplayed him. Only Fournette’s hamstring injury has made Jones relevant again for fantasy purposes. In his first start in a long time, Jones managed a reasonable 65 yards on 20 carries, scoring a TD against the Panthers. While not an eyepopping average at 3.3 yards per carry, the Panthers have a rather stout rushing defense. Looking at carry distribution, only Ke’Shawn Vaughn made a meaningful dent in Jones’ workload, with a 20 to 7 ratio in favor of Jones. Vaughn was primarily used as the third down back, with Jones to primarily handling first and second down. Expect the Bucs to continue deploying Jones and Vaughn in a similar manner with Fournette remaining out through the rest of the regular season. If you’re looking for a more prolific day from Jones, just wait until next week, as the Bucs get a mouth watering matchup versus the Jets. Jones will be a borderline top 10 play next week, and a must start. Don’t let Jones’ meager rushing stats against the Panthers hold you back from unleashing him against the Jets – he can help you win the trophy.

Analysis: The Houston Texans came into the season with the lowest of external expectations, but the team upset the Chargers in week 16 to secure their fourth win. General manager Nick Caserio has quietly put together a roster of young talent mixed with wily veterans. Rookie third round pick Davis Mills has shown promise at QB, perhaps showing that he can be the guy long term. While the offense’s best player has been WR Brandin Cooks, a former Patriot busted out with a mammoth performance in week 16. Remember Rex Burkhead? Starting in RB David Johnson’s absence, Tom Brady’s former teammate torched the Chargers with 149 rushing yards and 2 TDs, leading the Texans to the upset of the week. Burkhead shared carries with Royce Freeman, with Burkhead leading the distribution with approximately a 2 to 1 margin (22 to 12). Johnson has a quad injury, and he could return as early as next week. But would Johnson’s return knock Burkhead out of the lead spot? In the last 5 games preceding the Chargers’ matchup, Burkhead has had double digit carries in all but one of the games. Meanwhile David Johnson has averaged a paltry 3.2 yards per carry this season. As such, the smart money is on Burkhead retaining the lion’s share of carries, whether Johnson returns or not. Burkhead remains available in 86% of leagues and can provide help with the wire mostly picked over. The Texans face the 49ers next week, so he’s looking at an ok matchup. If you need an RB, put a claim in for Burkhead. He’ll be an RB3 / flex play in week 17.

Analysis: The Cincinnati Bengals have emerged as a marque fantasy team, with a Pro Bowl level QB in Joe Burrow, RB in Joe Mixon and WRs Ja’Marr Chase and Tee Higgins. While the first three names have gotten most of the pub, it’s Higgins who has quietly had a monster stretch over the past five games. During this time frame, Higgins has crossed the 100 yard threshold four times while scoring 4 TDs. This past weekend the Ravens were on the receiving end of Higgins’ most explosive game, as Higgins hauled in 12 balls for 194 yards and 2 TDs. Looking at the season in the aggregate, Higgins has had 10+ PPR points in 9 of 13 weeks, showing good weekly consistency. Higgins has quietly outperformed Chase over the second half of the season, making this more of a 1 and 1A situation than a 1-2. Higgins clearly sits as a weekly must start, which you don’t need me to tell you. As most fantasy managers have turned an eye towards next season, the intent here is to highlight Higgins as a potential top 10 fantasy WR for 2022, one that could be undervalued while in Chase’s shadow. There’s also a case to be made that Higgins, and not Chase, should be the first Bengals’ WR drafted, given Higgins’ penchant for consistency in comparison to Chase’s more boom or bust nature. Just a thought to tuck away.

Next week’s writeup will be my final for the 2021 season. Following with tradition, I will have a way-too-early 2022 fantasy mock draft for you. Keep an eye out for this! With the first pick in the 2022 fantasy draft, [insert name of fantasy team] selects…

Who goes after Taylor? Tune in next week to find out!

QB: Trey Lance, SF *if Jimmy G is out as expected

RB: Dare Ogunbowale, JAC (@ NE) *should start with Robinson out

RB: Jordan Howard, PHI (@ WAS) *should start with Sanders out