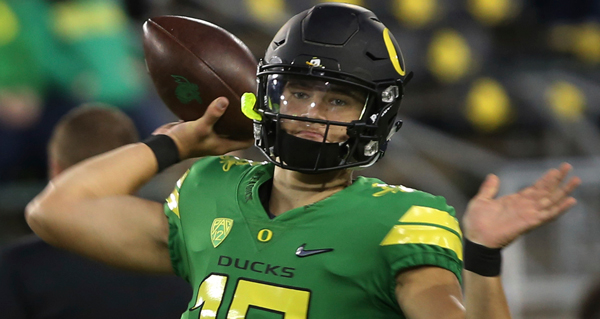 The NFL Draft can be a lucrative gambling opportunity for folks with chutzpah, good connections and a nice bankroll. And in this year of wild uncertainty thanks to NFL teams operating remotely and without as reliable information themselves as they normally have, it can be a great time to take some risks and potentially reap the rewards.

I don’t have a nice bankroll, alas. But that didn’t stop me from making a couple of wagers early on in the draft season, before most of America knew what COVID meant.

Justin Herbert +800 to be the second QB taken

The first one appears to be lost money. Like most analysts, I expect Young to be the No. 2 overall pick to Washington. The Ohio State EDGE is +1400 to be the third pick at BetOnline as of Monday night.

That Herbert prop, however...I’m spending those winnings already. Tua Tagovailoa’s durability questions have made these odds flip radically. Herbert is now -120 to be the second QB taken, after Joe Burrow (currently -10000 to be 1st). Tua is +100. He was as low as -250 at some books earlier in the process.

Some of the more intriguing props out there of the more than 200 available for wagering at various sportsbooks. All odds are from BetOnline on Monday evening unless otherwise specified. Please do not wager unless you can afford to lose every single cent you bet! Because you very well might...

There are four viable candidates here.

There’s no real money to be made on Wills or Wirfs, and I do expect Wirfs (not Wills) to be the first one selected. But the Thomas odds are a surprisingly rich payout for something that could absolutely happen, particularly if the New York Giants don’t go OT at No. 4 overall.

The overwhelming favorite here is Notre Dame’s Cole Kmet at -337. But in recent polling around with no less than 14 different draft analysts, Kmet was named as the top TE by just three. Five separate tight ends got No. 1 billing.

We might not have as good of an idea of what teams are thinking as in normal years, but it’s reasonable to expect NFL teams to be as wide-open and divided on the TE class as the analysts are. My personal expectation is that Dayton’s Adam Trautman (+450) will go first, but the more lucrative payout is with Missouri’s Albert Okwuegbunamat +850. Avoid Thaddeus Moss (+1200) as a sucker bet. If his dad wasn’t Randy, the LSU product wouldn’t sniff the top 200 picks.

Jerry Jeudy and CeeDee Lamb are both +110, but the smart money would be on Jeudy’s Alabama teammate, Henry Ruggs. At +325 it’s a decent payout for the man with the 4.29 speed and ridiculous big-play ability. Speed sells more than any other attribute for wide receivers in the draft, and Ruggs has more of it than anyone.

Total Ohio State players in the first round

The figure is over/under 2.5. Chase Young and Jeff Okudah are givens. It’s +370 that another makes it into the first round. I wouldn’t put much on it, but if you’re someone who likes J.K. Dobbins as the first RB (he’s +500, third among RBs) the payoff here is nice. Having said that, I like the value of the +145 under on 0.5 RBs drafted in the first round. This is why I don’t bet often…

Many prominent drat analysts, including The Athletic’s Dane Brugler and NFL.com’s Daniel Jeremiah, have recently and emphatically stated they believe Henderson will be a top-10 pick. There are reports out there that nearly half the league thinks the grabby Gator is CB1. Yet the lines here show the books don’t buy it; under 12.5 is +140, while over 12.5 is -167. I couldn’t tell you who grabs him in the first 12 picks, but I would bet someone does.

Georgia’s Rodrigo Blankenship is -179, a prohibitive favorite. I’ve got a hunch it will be Georgia Southern kicker Tyler Bass off the board first, and at +350 it’s worth baiting that hook a little.

The listing is just offense (-400) vs. defense (+310). Cleveland desperately needs a left tackle, but their No. 2 and 3 needs are on defense: linebacker and safety. Two of the three next needs after that are also on defense: DT and CB, with WR being the other. If they don’t get one of their preferred OTs at No. 10 overall, I would expect the pick to be either Isaiah Simmons, Javon Kinlaw or K’Lavon Chaisson, a sleeper prospect their old regime scouted heavily in the fall. Expect the pick to be an offensive tackle, but maybe dip the beak into the defense pool.