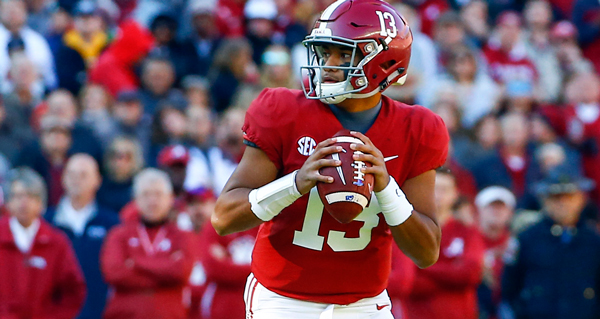 The Combine brought some things to light, lifted some stocks and sunk some others. Here’s my best interpretation of where the NFL teams are at before free agency begins later in March.

No trades in this edition. Longtime readers know my mocks that don’t feature trades tend to be more about matching the player and the draft slot more than it is about pairing teams with specific players.

1. Cincinnati Bengals: Joe Burrow, QB, LSU. No doubt about it. Next…

2. Washington: Tua Tagovailoa, QB, Alabama. Remember what I said above, where I said I’m fitting player with slot more than team with player? Yeah, that’s what is happening here, though I do still think Ron Rivera could make the radical change and the Skins could deal Dwayne Haskins. Wouldn’t bet on that though…

3. Detroit Lions: Chase Young, EDGE, Ohio State. If he’s still on the board, and he is in this scenario, Chase Young will be the pick. If he’s not, I expect Jeff Okudah and that’s independent of what happens with Darius Slay.

4. New York Giants: Mekhi Becton, OT, Louisville. One of the Combine’s biggest winners, his sheer size and ridiculous athleticism for a 370-pound behemoth makes him very appealing. Helping the team build around Daniel Jones and Saquon Barkley makes a lot of sense for Judge & his new staff.

5. Miami Dolphins: Justin Herbert, QB, Oregon. This is the first real wild card; I am oddly confident the four players listed above will be the top four picks (which of course means they’re all wrong!). The preseason No. 1 pick regained some momentum by being the best-throwing QB at both the Senior Bowl and the Combine.

6. Los Angeles Chargers: Isaiah Simmons, LB, Clemson. Simmons tested off the charts, as expected. Adding him to a defense that already includes hyper-versatile (and really good) defender Derwin James would give the Chargers the ability to mix and match and stay unpredictable for offenses.

7. Carolina Panthers: Jeff Okudah, CB, Ohio State. One of the best CB prospects I’ve ever scouted, Okudah has everything a needy team could ask for in a coverage corner. And the Panthers could be very needy if James Bradberry leaves in free agency. Then again, keeping him should not preclude new coach Matt Rhule from snagging the (potential) next great NFL island CB in Okudah.

8. Arizona Cardinals: Jerry Jeudy, WR, Alabama. Because Larry Fitzgerald (probably) can’t play forever. Because Kyler Murray needs a dynamic playmaker to grow with. Because some teams will have Jeudy as the highest-graded offensive player in the entire draft and it seems absurd he’ll fall to the eighth pick, even after a substandard Combine.

9. Jacksonville Jaguars: Javon Kinlaw, DT, South Carolina. Kinlaw and Auburn’s Derrick Brown are both really good DT prospects, but Kinlaw offers more sizzle with his penetrating pass rush. His incredible backstory is an easy sell too. If you prefer Brown and his better run defense, I won’t argue against that here.

10. Cleveland Browns: Tristan Wirfs, OT, Iowa. “But he only plays right tackle and doesn’t have ideal length,” they’ll say. The proper response is, “have you seen Chris Hubbard play in the last two years?” The Browns desperately need two starting offensive tackles, and Wirfs can instantly be a major upgrade at RT even if his play falls off from his stellar Hawkeyes career.

11. New York Jets: Henry Ruggs, WR, Alabama. This goes with the (perhaps faulty) presumption the Jets sign an offensive tackle in free agency. Ruggs and his 4.28 speed, giant hands and playmaking flair are perfect for a Jets offense that has Sam Darnold throwing to, uh, hmmm…

12. Las Vegas Raiders: Jordan Love, QB, Utah State. Another case here of matching player with slot more than team/player, though if there is any doubt in the Gruden/Mayock braintrust in Derek Carr’s long-term potential, it makes sense to make this move with the team’s relocation. Any team picking later that wants a QB will need to trade here to get ahead of the Colts, too.

13. Indianapolis Colts: Andrew Thomas, OT, Georgia. The threat of Anthony Castonzo retiring awakens the need to plan for the future up front. Thomas has the potential to be the next Jason Peters, a comparison I got directly from an AFC North scout last fall. If he comes even close, Thomas is worth the investment for the Colts.

14. Tampa Bay Buccaneers: Josh Jones, OT, Houston. His eye-opening Senior Bowl week catapulted Jones up draft boards. The game tape doesn’t yet match what we saw in Mobile, but the tools are there for the Buccaneers to work with to finally solve their OT revolving door.

15. Denver Broncos: Derrick Brown, DT, Auburn. A really good run-stuffing DT with some ability to seriously disrupt up the gut in the passing game too, Brown had an underwhelming Combine. The Broncos seize upon the opportunity to shore up the middle-of-field defense.

16. Atlanta Falcons: Jedrick Wills, OT, Alabama. Wills could very well go in the top 10, which is why the Falcons pounce here on the standout right tackle. He should be able to move to the left side or kick inside as the Falcons find the best combination for the OL.

17. Dallas Cowboys: CeeDee Lamb, WR, Oklahoma. Arguably the best after-catch receiver in the draft, Lamb would bring playmaking sizzle to the Dallas offense and fit in nicely with the skill-position core already in place.

19. Las Vegas Raiders: C.J. Henderson, CB, Florida. One of the most impressive athletes at the Combine, Henderson attacks the ball in the air. That’s an area of focus for improvement for the Raiders, who picked off just nine passes last year.

20. Jacksonville Jaguars: Xavier McKinney, S, Alabama. The Jaguars must restock the secondary, and adding a proven playmaker in both the run and pass games like McKinney is a smart choice. He’s a great fit playing behind a strong pass rush.

21. Philadelphia Eagles: Patrick Queen, LB, LSU. Queen can step right into Jim Schwartz’s defense as the sideline-to-sideline pursuit backer with lightning-quick reactions. A defense that values speed and consistency will appreciate Queen, and that’s the Eagles.

22. Buffalo Bills: Laviska Shenault, WR, Colorado. Adding more help for Josh Allen is a welcome decision, and Shenault’s physicality and ability to create from multiple spots. His ability to catch errant throws and work away from the ball are huge assets for strengthening the Bills offense.

23. New England Patriots: Kenneth Murray, LB, Oklahoma. Murray is the prototypical Belichick LB--solid, smart, versatile and capable of playing multiple spots. While he doesn’t have optimal size, he’s big enough at 6-2 and 241 given how well he plays behind the D-line.

24. New Orleans Saints: Jalen Reagor, WR, TCU. A speedy, dynamic complement to Michael Thomas that can help ease the transition once Drew Brees is no longer throwing passes with insane levels of accuracy.

25. Minnesota Vikings: A.J. Epenesa, DE, Iowa. Power-to-speed rusher with some of the same traits as J.J. Watt when he came out of Wisconsin. Not saying he’s the next Watt, but if he’s even close to it the Vikings got themselves another defensive line steal in the draft.

26. Miami Dolphins: Austin Jackson, OT, USC. It’s fitting for the Dolphins to use the Texans’ first-round pick on an offensive tackle after acquiring the pick for a really good one in Laremy Tunsil. Jackson has uneven game tape but the potential to be a long-term solution for a team in dire need of those.

27. Seattle Seahawks: Kristian Fulton, CB, LSU. When he’s on top of his game, Fulton has an argument as the best cover man in this class. If the Seahawks can coax his A-game regularly, Fulton can bring back some more swagger to the Seattle secondary. Hit/miss prospect for a team that tends to take a lot of hit/miss players. A lot of them hit, too...

28. Baltimore Ravens: Zack Baun, LB, Wisconsin. With a LB corps in free agent flux, tabbing the versatile Baun would make some sense. He can play the rush role currently occupied by Matt Judon but also is working to become a more Joe Schobert-like off-ball LB.

29. Tennessee Titans: A.J. Terrell, CB, Clemson. Terrell’s impressive Combine and smart scheme fit with the Titans defense make this a natural fit. A wideout also makes a lot of sense here, but the depth at WR pushes the choice to the defensive side of the ball.

30. Green Bay Packers: Justin Jefferson, WR, LSU. The Packers tab a reliable big-play threat to work with Davante Adams, and Jefferson’s work as part of a dynamic collegiate tandem and with an improvisational QB is great training for the role in Green Bay.

31. San Francisco 49ers: Noah Igbinoghene, CB, Auburn. Still learning how to play defense after converting from WR, but the son of Nigerian Olympic sprinters has taken to his new position quickly. He’s got a very high ceiling and would benefit from a year suckling at the teat of Richard Sherman in Robert Saleh’s defense.

32. Kansas City Chiefs: Lloyd Cushenberry, IOL, LSU. The best interior line prospect in the class goes to a team that needs some reinforcements up front. His ability to find work in space after the initial scuffle is a great fit for the Chiefs and Patrick Mahomes at QB.