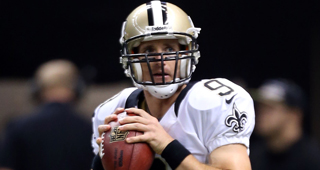 In what unexpected turned into a shootout, the OG Drew Brees put on a performance for the ages against the rugged San Francisco 49ers’ defense. The Saints lost in the final seconds, but none of the blame falls on Brees, who threw for five TDs and ran for a sixth. Brees used to dominate fantasy leagues, and even now just a month shy of his 41st birthday, Brees still hovers in QB1 range. He’s an easy first ballot Hall of Famer, and an underrated QB at that.

Speaking of underrated, Los Angeles Chargers’ RB Austin Ekeler has quietly been a top 5 RB this year, and will be one of the most commonly found players on fantasy championship rosters. If Melvin Gordon moves on next year as expected, Ekeler may well find himself drafted in the first rounds of fantasy leagues.

Titans’ rookie WR AJ Brown had the longest scoring play of the week, catching a 91 yard bomb from QB Ryan Tannehill in the win against the Raiders. We looked at Brown earlier this season, and we’ll give him another look below now that his circumstances have changed.

Denver Broncos rookie tight end Noah Fant has absolutely come on as the season’s progressed, and he’s working his way into the sleeper mix for 2020 drafts. Fant crossed the 100 yard receiving mark and found the end zone against the Houston Texans. He’ll be a low end TE1 over these last few weeks, so grab him if you need a TE.

Analysis: The Denver Broncos have had a rough 2019 season, but their future quietly looks bright. Young skill players such as Courtland Sutton, Philip Lindsay and the aforementioned Noah Fant have continued to blossom, and their defense has young talent at all levels. Ultimately just how good the Broncos will be over the next few years, however, rests in the hands of rookie QB Drew Lock. The highly touted second round pick from Missouri stands tall at 6’4’’, just as John Elway prefers. But unlike other tall former Broncos’ quarterbacks like Brock Osweiler and Paxton Lynch, Lock looks like he can actually play. Lock has a rocket for an arm, but he also has a nice touch on his throws. Against the Houston Texans this past Sunday, Lock found the end zone thrice and crossed the 300 yard mark, which makes him the first rookie QB to ever hit both of those benchmarks in his first road start. One of the knocks on Lock in college was his on-field decision making (i.e. throwing into triple coverage), so Lock will go through some growing pains. Looking at the schedule the next few weeks, Lock can help. The Broncos face a relatively tough Chiefs’ pass D in week 15, but they get two creampuff matchups in Weeks 16 and 17 in the Lions and the Raiders. Give a look to Lock for those last two weeks if you need a QB.

Analysis: Oakland Raiders’ star RB Josh Jacobs was a game time scratch against the Tennessee Titans due to a shoulder injury, so backup RB DeAndre Washington got the start…and he acquitted himself quite well. Washington rushed for 53 yards and a TD, while also catching 6 passes out of the backfield, picking up 43 yards. Notably, Washington outcarried backfield mate Jalen Richard by a 14 to 7 margin. The big question here is Jacobs’ status going forward. Given the Raiders are essentially out of the playoff picture, the smart move would be to shut down Jacobs for the season. In any event, the likelihood of Jacobs playing this coming week against the Jacksonville Jaguars remains slim. Washington is a solid but not spectacular runner, but he does have good hands for an RB. Most importantly, he will have carries. Assuming Jacobs is at least out this week, then Washington will have a juicy matchup versus the Jags, and he should be the top RB pickup in leagues - except in any league where Raheem Mostert has yet to be rostered.

Analysis: Usually we don’t cover a player here multiple times during the season, instead using this space to feature as many different players as possible. That being said, occasionally there are significant changes in a team’s situation which necessitate the need for a second peek. Marcus Mariota was the QB when we initially did a deep dive on Brown. So when the Titans benched Marcus Mariota for Ryan Tannehill, the move was initially met with a collective shrug. The results, however, couldn’t be louder. The Titans have become a top-5 offense, moving the ball with ease both through the air and the ground. In the seven games since Tannehill took over, Brown has a per game average of 5.4 targets, 3.5 receptions and 72 yards receiving, with four TDs over this span. Brown’s profile from earlier this season hasn’t changed – he’s an inconsistent, low volume, high production per reception player. What’s changed since Tannehill’s insertion, however, is his floor and his ceiling, both of which have been raised. Brown has elevated himself to a weekly flex play, with low-end WR2 status against poor pass defenses. Brown remains available in 76 percent of leagues, and should be the top waiver claim if you need a WR. He faces the Texans and Saints in his next two matchups, and those are both matchups that he will exploit.

Analysis: The New York Jets got off to a wretched start this year, winning only one of their first eight games. However, the J…E…T…S have come to life in the second half of the season, winning four of their last five games. Second year QB Sam Darnold has been the key to their turnaround, having thrown nine TDs versus just two INTs over these contests. A rising tide floats all boats, and Darnold’s resurrection has made Robby Anderson fantasy relevant again. Over the past three games, Anderson has caught 18 balls for 303 yards and two TDs, having been targeted by Darnold 26 times. Anderson showed last season that he’s no fluke, and he will continue to be Darnold’s top target. The schedule tightens on the Jets over the next few games, as they face the Ravens and the Steelers, so expect some pullback on these numbers. But the Jets will likely be trailing in these matchups, so the passing game will be active. Anderson will be a solid flex option - start him with confidence.

Each week we throw out potential free agent pickups from each position for deeper leagues, in each case 1) someone who has NOT been referenced above, and 2) a player available in more than 50% of leagues.

WR: Darius Slayton, NYG (how many times do I need to list him here?)