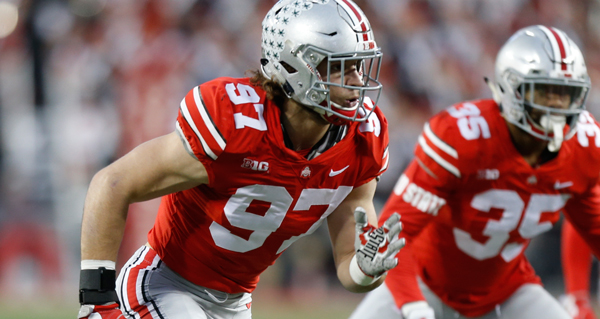 This edition has quite a few changes in player and draft slot from the first edition. Spending two weeks with NFL personnel evaluators at the Shrine Game and Senior Bowl gave me a better idea of how some prospects are viewed from the NFL ranks, and the changes here reflect that. Note that at this stage of the draft season, coaches are still getting their feet wet with most of the prospects. The Combine at the end of February into early March will provide even more clarity.

1. Arizona Cardinals: Nick Bosa, EDGE, Ohio State. Instant impact pass rusher who can play in a variety of roles and schemes. At this point, the only real question is his durability. Will that be enough to convince the Cardinals to look elsewhere? Right now, I don’t think it trumps Bosa’s game-changing potential.

2. San Francisco 49ers: Quinnen Williams, DT, Alabama. It’s hard to watch the 49ers devote yet another premium draft pick to the defensive line, but it’s also hard to ignore just how much Williams can help San Francisco where they really need it. Someone could trade up here to land Williams too.

3. New York Jets: Ed Oliver, DT, Houston. I expect Oliver to show out in Indy and revive the interest in him as the potential No. 1 overall pick. His ability to create pressure up the gut and make plays behind the line is exactly what the Jets need in a division with a diverse range of opposing QBs.

4. Oakland Raiders: Kyler Murray, QB, Oklahoma. Does it make sense for the Raiders to scrap Derek Carr? Probably not. But it’s so easy to see Jon Gruden being infatuated with all Murray can do and how it would allow the Raiders to change the dynamics of defending them. They’re in a good position to take such a risk, too.

5. Tampa Bay Buccaneers: Cody Ford, OT, Oklahoma. Ford is an instant starter at one of the tackle spots, which is both a credit to his rapid rise and an indictment of how badly the Buccaneers need the powerful help he can provide.

6. New York Giants: Josh Allen, EDGE, Kentucky. What, no QB?! Not in this instance. Instead, GM Dave Gettleman opts to fortify the pass rush with the versatile Allen and buys another year with Eli Manning. His pass rushing prowess is a difference-maker.

7. Jacksonville Jaguars: Dwayne Haskins, QB, Ohio State. This pick seems like a lock if Haskins remains on the board. The Jaguars sorely need to hit on a high-end QB, and Haskins has the pocket passing precision to pay off quickly.

8. Detroit Lions: Clelin Ferrell, EDGE, Clemson. Ferrell checks the boxes the Lions want in upgrading the pass rush: he can line up in multiple spots and schemes and plays the run exceptionally well on his way to the QB. Lower ceiling than the pass rushers above him here but his ability to generate pressure on his own is underrated.

9. Buffalo Bills: Jawaan Taylor, OT, Florida. I was surprised at the buzz around Taylor from scouts at the Senior Bowl. His athletic profile and potential is highly regarded and could easliy land him in Buffalo, where building around running QB Josh Allen and replacing free agents at both RT and RG are imperative.

10. Denver Broncos: Drew Lock, QB, Missouri. Joe Flacco handles the reins until the live-armed Lock can take over. It’s a risky pick--Lock has real warts that must be smoothed--but could result in John Elway finally getting the QB position right.

11. Cincinnati Bengals: Devin White, LB, LSU. This is a very common projection and that’s for good reason; the Bengals are typically one of the easiest organizations to read in terms of draft intentions. To quote The Cranberries, “Everybody else is doing it so why can’t we?”

12. Green Bay Packers: T.J. Hockenson, TE, Iowa. A do-it-all weapon who can quickly ingratiate himself to Aaron Rodgers for both his blocking and his receiving, this one should get the QB’s seal of approval.

13. Miami Dolphins: Rashan Gary, DL, Michigan. A divisive prospect but one with a very high ceiling, Gary could help catapult the Dolphins defense with his athleticism and ability to get after the passer.

14. Atlanta Falcons: Noah Fant, TE, Iowa. Atlanta appears to be a prime candidate to trade back, but “settling” for the freaky Fant should tickle Falcons fans’ fancy. Another versatile receiving weapon in an offense that is already hard to defend.

15. Washington: D.K. Metcalf, WR, Ole Miss. Currently built more like a defensive end than a wideout, the 6-4, 230-pound Metcalf proved he can play before his neck injury. The durability question keeps him out of the top 10, methinks. Washington doesn’t mind...

16. Carolina Panthers: Jonah Williams, OT, Alabama. Williams proved himself in big games, and his ability to adapt within a play and recover if initially beaten stand out. With the questions Carolina has at both tackle spots, adding a ready-made starter is a positive.

18. Minnesota Vikings: Greg Little, OT, Ole Miss. Little has loads of athletic potential but uneven results in pass protection. Vikings GM Rick Spielman bites the apple and hopes it tastes sweet in a year or two at a position where the team keeps hitting sour notes.

19. Tennessee Titans: Byron Murphy, CB, Washington. Murphy offers naturally instinctive stickiness in coverage and the ability to play outside or in the slot. He’s a player who could rocket way up from this range with a good week in Indy.

20. Pittsburgh Steelers: Greedy Williams, CB, LSU. The Steelers search for a playmaking CB leads them to Williams, who offers length and speed to help bolster an uneven secondary.

21. Seattle Seahawks: Jachai Polite, EDGE, Florida. If Frank Clark leaves in free agency, the Seahawks almost have to use this pick to address the pass rush. If Clark returns, that opens this pick up to other options, but Seattle would still need EDGE help. Polite brings sizzle off the edge.

22. Baltimore Ravens: Kelvin Harmon, WR, North Carolina State. The Ravens could do a lot worse to build around Lamar Jackson than selecting the physical, reliable Harmon. Aside from having great hands and running smooth routes, he’s an incredible blocker.

23. Houston Texans: Garrett Bradbury, OC/OG, North Carolina State. The quest to upgrade the long-struggling offensive line in Houston turns to one of the most physical finishers in the draft and an instant starter at any of the three IOL positions for the Texans.

24. Oakland Raiders (from CHI): N’Keal Harry, WR, Arizona State. Oakland uses the bounty from Amari Cooper to replace him with the supersized Harry, who moves quite well for a 6-6 receiver and can really help on 3rd downs and in the red zone.

25. Philadelphia Eagles: Montez Sweat, EDGE, Mississippi State. His stiff-arm bull rush wowed in Mobile, and his game tape features more of his high football IQ and ability to bend the edge. He and Derek Barnett as the Eagles young edges would be fun to watch

27. Oakland Raiders (from DAL): Devin Bush, LB, Michigan. Bush can fly all over the field and do anything asked of an NFL LB, but his size (he’s expected to be 5-10/225) is a detraction. Give Gruden football players like this and the size doesn’t matter (much).

28. Los Angeles Chargers: Andre Dillard, OT, Washington State. The Chargers depth up front is shallower than a Kardashian’s intellect. Dillard can play either tackle spot and appears undervalued at this point in the draft process.

29. Kansas City Chiefs: DeAndre Baker, CB, Georgia. Building up the pass defense is an imperative for a team that figures to see a lot of comeback attempts against them. Baker brings a physical presence with a high football IQ; his speed in Indy is one of the biggest things I’m watching.

32. New England Patriots: Irv Smith, TE, Alabama. It’s convenient to call Smith a Gronk replacement, but the lithe Smith has a different style of game. The Patriots will find ways to use his elusiveness in space and his blocking chops.

Teams that lack a first-round pick...