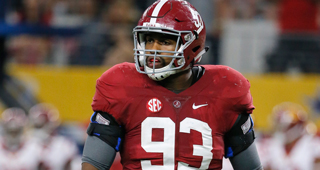 We are just one month from the 2017 NFL Draft. Teams are finalizing their draft boards as pro days wrap up and individual visits crank into full gear.

This one goes three full rounds, and I’ll keep the commentary brief. Keep in mind that after about the first 25 or so picks I’m much more interested in matching player to draft slot than I am player to team, so don’t get crazy if some of the later picks here seem odd.

By now you know the drill. This picks represent my best guess as to what the teams will do in the given situations. They do not necessarily represent the choices I would make at the given pick. That’s what edition 5.0 is for…

1. Cleveland Browns: Myles Garrett, DE, Texas A&M. The card might as well be turned in already. Next…

2. San Francisco 49ers: Malik Hooker, S, Ohio State. No one I’ve talked to, and that includes guys who cover the 49ers for a living, has a real strong feeling for who the Niners are going to take here. Hooker is a playmaking safety and new GM John Lynch was a great safety, so I’ll color in those lines.

3. Chicago Bears: Marshon Lattimore, CB, Ohio State. I held firm here with Clemson QB Deshaun Watson even after signing Mike Glennon, but adding Mark Sanchez tells me they already have their Plan B in case Glennon flops. Lattimore is a special coverage talent as long as he can stay on the field.

4. Jacksonville Jaguars: O.J. Howard, TE, Alabama. With so much capital spent on defense, both draft and free agency, I believe it tips this pick to the offensive side. There are some who think they’ll go QB or RB here, and I wouldn’t argue with either direction, but Howard is the surest thing as an impact player as both a receiving weapon and a blocker.

5. Tennessee Titans: Jonathan Allen, DE, Alabama. The offensive line looks great, now it’s time to bolster the DL. Allen was a major disruptive force for the Crimson Tide, able to play all over the line. He and Jurell Casey together should be a great duo.

6. New York Jets: Garett Bolles, OT, Utah. He’s a 25-year-old with one year of college football. He’s also an incredibly gifted athlete with outstanding tenacity and effort. His game and demeanor echo Taylor Lewan. The Jets desperately need a tone setter on offense and Bolles can be just that.

7. Los Angeles Chargers: Jamal Adams, S, LSU. Building up the coverage capability on the back end is always welcome in a division with so many talented WRs. Adams isn’t an impact tackler but makes up for it with range and acumen in covering receivers of all types.

8. Carolina Panthers: Solomon Thomas, DE, Stanford. Thomas is an odd size, but that doesn’t make him a bad fit. His explosive ability and finishing prowess are outstanding for a player who can play base end but kick inside in NASCAR rush packages. For a team heavily reliant on 37-year-old Julius Peppers to produce as a pass rusher, he’s a no-brainer.

10. Buffalo Bills: Mitch Trubisky, QB, North Carolina. A new, offensive-minded head coach. An incumbent QB they sure seem to not want to keep, with an easy out in his contract. Some will disagree but I think it sets up perfectly to take Trubisky. He lacks reps but has the arm, vision and confidence to thrive further up the Lake Erie coast from his hometown some 2.5 hours to the west.

11. New Orleans Saints: Deshaun Watson, QB, Clemson. Despite the legit concerns about arm strength, everything else about Watson screams above-average NFL starter. His natural leadership, accuracy, sense of timing and experience lighting up talented defenses will make for a nice transition from Drew Brees, in time.

12. Cleveland Browns: Patrick Mahomes, QB, Texas Tech. I bounced the concept of Mahomes to Cleveland off several Browns-affiliated folks during Combine week, and to a man they all agreed coach Hue Jackson would approve. I’ll claim some editorial prejudice here, as I personally endorse and advocate this selection.

15. Indianapolis Colts: Leonard Fournette, RB, LSU. He could go higher, but in this scenario Fournette slides out of the top 10. The bruising Fournette would make life a lot easier for Andrew Luck. I had Washington CB Sidney Jones mentally penciled here before he tore his Achilles at his pro day.

16. Baltimore Ravens: Gareon Conley, CB, Ohio State. Conley was quietly the best shutdown corner in America last season, allowing a QB rating under 14 on passes thrown his way. They did sign CB Brandon Carr and S Tony Jefferson in free agency, so Baltimore could opt for the first WR off the board here too.

17. Washington: Malik McDowell, DE, Michigan State. If he decides he wants to, McDowell can make this slot look pitifully late for a player of his considerable physical gifts. He could also fail to earn a second NFL contract; it’s that variable. I had Forrest Lamp here but I can’t see the Skins using two first-round picks in three years (Brandon Scherff in 2015) on guards.

18. Tennessee Titans: Corey Davis, WR, Western Michigan. The first wideout, Davis slides a bit because of the ankle injury which wiped out his workout season. He’s got better route-running, speed and run-after-catch ability than Mike Williams. The Titans going wideout is one of the easier projections, though they do need some secondary and pass rush help too.

20. Denver Broncos: Ryan Ramczyk, OT, Wisconsin. This is a pick posited in my mind since the Combine, where someone who covers the team planted the seed. It makes sense for Denver and their OL needs, and it’s the right range for the technically skilled but inexperienced Ramczyk to come off the board.

21. Detroit Lions: Derek Barnett, DE, Tennessee. Detroit desperately needs an athletic pass rusher opposite Ziggy Ansah, and Barnett fits the bill. In fact, it’s somewhat surprising the highly productive Volunteer is still available. It says here if Haason Reddick is on the board he’s the pick, I’d bet my next paycheck on it.

22. Miami Dolphins: Reuben Foster, LB, Alabama. A disastrous Combine killed the top 10 talk, but people expecting Foster to plummet out of the first round are ignoring loads of impressive game tape and a thirst for what skills he brings to the table. Even after the Lawrence Timmons signing, Miami still needs long-term LB help. Sleeper pick: Chidobe Awuzie

23. New York Giants: T.J. Watt, OLB, Wisconsin. Watt can play either as a stand-up rusher or an off-ball SAM. Too many people underestimated his brother J.J. once upon a time, and the Giants sorely need his impact in the passing game as either a rusher or in coverage.

24. Oakland Raiders: Marlon Humphrey, CB, Alabama. Humphrey struggled with injuries last year but has a very high ceiling and an NFL pedigree. No matter where the Raiders are playing, they must upgrade the pass defense.

25. Houston Texans: Cam Robinson, OT, Alabama. As much as the Texans need help at QB, their right tackle situation is even direr. Robinson has been inconsistent and his technical development stagnated, but even at his current level he can be a great NFL right tackle. If Garett Bolles is on the board he’s the preferred pick.

27. Kansas City Chiefs: Deshone Kizer, QB, Notre Dame. This is pure speculation based on a dinner conversation I had with a scout from a different team following Notre Dame’s pro day. His team believes Andy Reid and the Chiefs love the polarizing Kizer, who looked like a potential No. 1 overall pick in 2015 but regressed in ’16.

28. Dallas Cowboys: Obi Melifonwu, S, UConn. Is it a little too convenient to pair the freaky athletic Melifonwu with his Huskies predecessor Byron Jones in the Dallas secondary? Maybe, but keep in mind the Cowboys suffered major losses back there too. Sleeper pick: Charles Harris.

29. Green Bay Packers: Mike Williams, WR, Clemson. In this scenario the wideouts slide, and the Packers benefit by landing Williams. His size, improved work in traffic, and competitive spirit overcome some bad drops and inconsistent route running. Aaron Rodgers will love him in the red zone.

30. Pittsburgh Steelers: Takk McKinley, OLB, UCLA. Because James Harrison is old enough to be McKinley’s father but is still Pittsburgh’s best pass rusher. Because McKinley naturally fits in Pittsburgh’s 3-4 front. Because his shoulder surgery makes him a risky proposition as a rookie, but the Steelers can wait until Harrison peters out.

31. Atlanta Falcons: Forrest Lamp, OL, Western Kentucky. Another player who often projects much higher, but here his lack of length holds him down a bit. A college LT, he can play any spot along the line including center. For the Falcons, he’d likely start right away at right guard.

32. New Orleans Saints: Jabrill Peppers, S, Michigan. The Saints acquired this pick from New England for Brandin Cooks. It could very well be traded once again, and this is a reminder I’m much more interested in being accurate with player/slot than team/player projections from this point onward.