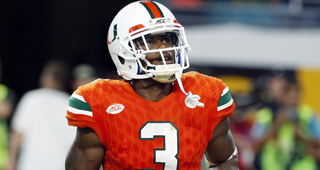 I’ll be in St. Petersburg for the annual Shrine Game this week. This is my sixth trip to cover the game, the practices and the various goings on at the team hotel, the gorgeous Tradewinds Resort.

Here are 10 of the player I will be focusing on during the practice sessions, which run Monday thru Thursday. I will have a daily summary each evening, and you can follow me on Twitter @JeffRisdon to get live action updates from the practice fields.

Stacy Coley, WR, Miami FL--Hurricanes players have found a way in recent years to show a lot more on the practice field at Shorecrest Prep Academy than they did at Miami. Guys like Anthony Chickillo, Brandon Linder and Deon Bush have all helped elevate their draft stock in Shrine Game practices. Coley has the potential to carry on that tradition. He seems suited for the slot instead of playing more outside, but he must show he can cleanly catch throws with high velocity, something he didn’t get to do with the soft-tossing Brad Kaaya.

Erik Magnuson, OT, Michigan--Magnuson is a natural right tackle who played much better than expected his senior season. His challenge is sustaining blocks against craftier rushers, as it still seems like the physical Magnuson is thinking more than reacting when a more skilled defensive end varies the attack. Linemate Kyle Kalis is also on the roster, though most Wolverine fans will tell you he probably shouldn’t have started in college.

Ejuan Price, DE, Pittsburgh--the compact (listed 5’11” and 245) edge rusher played quite well in the Panthers’ big games last fall. His lack of length and reliance on a big first step to win the edge also showed at times. I really can’t wait to see him face off in one-on-one reps with Arkansas OT Dan Skipper, who stands almost a foot taller. The fact Price plays wearing the football version of capri pants doesn’t hurt his appeal, either. His Pitt teammate, tight end Scott Orndoff, is another to keep an eye on as a potential riser as a throwback style of TE.

Michael Roberts, TE, Toledo--I’ve been high on Roberts for awhile, and now I get a better chance to see his footwork and athleticism up close. I know he’s a great, sticky-handed target with a giant catch radius. I know he’s very good at using his 6’5”, 270-pound frame in the red zone and short yardage situations. He’s shown he can be lithe in the open field, but that’s often schemed for him. He has the size to be an impressive in-line tight end, but the Rockets preferred to use him outside and in the slot. His blocking in team drills and ability to operate in one-on-one reps as a receiver are going to be critical in his evaluation.

Jalen Robinette, WR, Air Force--the big wideout looks very similar to Laquon Treadwell, both physically (6’4” and 215) and stylistically. Well, as much as receiving style can be gleaned from Air Force’s run-option offense. Robinette caught more than half his team’s receptions (35 of 68) and was routinely bracketed in coverage. He needs to show he can function in a more sophisticated passing offense and handle man coverage from more accomplished corners. He might get to face Falcons teammate Weston Steelhammer, an awesomely named safety, in West practice reps.

Cooper Rush, QB, Central Michigan--Entering the season I thought Rush had a shot to earn a Senior Bowl berth, but he didn’t play as well as expected. Some of that was on his teammates, but the ball placement and zip on downfield throws didn’t look as strong in 2016 as in ’15. His completion percentage fell from over 66 to under 60, and his yards per attempt also declined. This is a shot at redemption for Rush, who still displays a lot of desirable attributes. A strong week in St. Pete and he’s back in the draftable conversation.

Karter Schult, DL, Northern Iowa--one of the standout FCS defenders, Schult hopes to follow former Panthers mate Xavier Williams into the NFL. Schult’s game--what little I’ve seen of it--reminds me of Anthony Zettel from last year, an undersized NFL defensive tackle playing end. If Schult proves he can handle the speed and strength in St. Pete, there’s a good chance he gets drafted around where Zettel did in the sixth round.

Tedric Thompson, S, Colorado--one of college football’s best ballhawks, Thompson has lot of really strong game tape in coverage. He is very active with the ball in the air, picking off 7 passes and dropping at least 4 others. My biggest question with Thompson is his choice of angles. When I saw him in person at Michigan, he didn’t always divine the best path to the point of attack. That will stand out in team reps. Thompson highlights five Buffaloes defenders on the West roster, a group which includes CB Ahkello Witherspoon. I like Witherspoon more than most do.

Cameron Tom, C, Southern Miss--The agile center is listed at 6’4” and 290 but an area scout I talked with thinks both of those are generous. While the Shrine Game weigh-ins are closed to the media and the outcomes closely guarded, that’s the most important part of the week for Tom. He’ll also get a chance to show his anchor strength against big DTs like Louisville’s DeAngelo Brown and Jason Carr of West Georgia, a small-school player I have not seen yet.

Alek Torgersen, QB, Penn--I’ll admit to only seeing highlight reels of Torgersen, but when I bounced names for this piece off some scouts his name invariably came up. He’s hoping for a week similar to what Jimmy Garoppolo had back in 2014, elevating his profile at the Shrine Game by being the best passer on the field by a huge margin. Torgesen doesn’t seem as high-end as Jimmy G, who went in the second round to New England, but I know a couple of teams have a lot of interest in how he looks against higher competition.