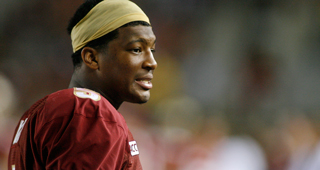 1. Tampa Bay Buccaneers: Jameis Winston, QB, Florida State. My humble summation is that Winston going over Mariota is more of a lock than Andrew Luck going over RG3 back in 2012 at the same point. The off-field stuff might be unsavory to many but the talent is undeniable.

2. Tennessee Titans: Leonard Williams, DT, USC. Williams is one of the rare prospects where it is hard to find any legitimate criticisms to his game. He’s the best DT prospect since Ndamukong Suh. I do believe the Titans will pass on Mariota.

3. Jacksonville Jaguars: Dante Fowler, Edge, Florida. The position Jacksonville addresses here sure seems obvious: pass rusher. Will it be Fowler, or Randy Gregory, or Vic Beasley? That’s the tough question. In this scenario the nod goes to Fowler, who is by far the most natural of that trio at doing things other than rushing the passer.

4. Oakland Raiders: Marcus Peters, CB, Washington. One of the tidbits I picked up in Indy was that NFL teams truly don’t have much issue with Peters’ dismissal from the Huskies. He’s been straightforward in explaining his immaturity and the staff that booted him has actively had his back. His skills make this a nice pick for Oakland, who are looking hard at defense despite seemingly everyone hellbent on issuing them a wideout.

5. Washington: Vic Beasley, Edge, Clemson. Perhaps no player did more positive for his stock than Beasley, who impressed by gaining nearly 20 pounds from his playing weight and still blew away the workouts with speed and explosion. The Skins need impact players, and Beasley offers high potential in that capacity.

6. New York Jets: Trae Waynes, CB, Michigan State. Somewhere in Western NY Rex Ryan weeps as the Jets finally take a viable island corner Ryan so desperately wanted. Hard to pass on Mariota here but I got the sense the Jets brass wasn’t all that enamored with the growing pains of a project QB. One caveat with the speedy Waynes: his 3-cone time is worse than his 40-yard dash time. That’s really not good for guys in space.

7. Chicago Bears: Shaq Thompson, LB, Washington. The Bears defense was built around a safety-turned-linebacker with great range for years. I’m not saying Thompson is Brian Urlacher, but Chicago is in a position where they have to see if he can be close. Switching to a 3-4 raises the need for adding LBs, too.

8. Atlanta Falcons: Randy Gregory, OLB, Nebraska. Gregory’s surprisingly light 236 pounds in Indy raised some eyebrows. So did his workout. He’s strictly a linebacker to be deployed a la Anthony Barr a year ago, a base SAM who rushes the passer from all angles in nickel packages.

9. New York Giants: Ereck Flowers, OT, Miami FL. Big, agile and the benefit of a lot of buzz in Indy, Flowers tantalizes with his upside at left tackle. New York continues the overhaul of the offensive line with a player who could dominate if he continues to develop.

10. St. Louis Rams: Marcus Mariota, QB, Oregon. This is admittedly lower than Mariota is going to come off the board. And at this point it’s far more likely another team is trading to get him than the Rams are going to take him, though buying one last year with Sam Bradford before turning it over to Mariota does make a lot of sense.

11. Minnesota Vikings: Amari Cooper, WR, Alabama. There will be debate until the names are called about the ordination of the wideouts. The fact there is such debate could create an interesting market where teams wait longer, as happens here. He becomes the much-needed #1 target for Teddy Bridgewater.

12. Cleveland Browns: Danny Shelton, DT, Washington. He’s the slowest player in Indy, but he might not run 40 yards in a quarter in the NFL. Shelton’s playmaking range allowed him to make 93 tackles despite facing near-constant double teams. There is risk, but there is considerable reward. The Browns are definitely looking to upgrade the defensive front.

13. New Orleans Saints: Landon Collins, S, Alabama. The Saints have myriad defensive needs, and Bud Dupree going here would not surprise one iota. Collins is a better talent than Ha Ha Clinton-Dix, his old Bama running mate who went 21st last year. Because he might be the only safety in the top 60, his value is augmented.

14. Miami Dolphins: Brandon Scherff, G, Iowa. Miami continues to rebuild the offensive line with the powerful Scherff, a tackle in college who projects better inside in the NFL. Sleeper pick here is Jordan Phillips if his back problems are cleared.

15. San Francisco 49ers: Kevin White, WR, West Virginia. I can see White going fourth overall, but in this scenario he drops to a team in desperate need of a playmaking wideout in San Francisco. Easy sell here.

16. Houston Texans: Todd Gurley, RB, Georgia. I do strongly believe Gurley goes in the 15-20 overall range, and Houston does make sense. They have Arian Foster to shoulder the load in ’15 while Gurley gets healthy, then can spring the powerful Bulldog on the NFL and part ways inexpensively with Foster just as he turns 30.

17. San Diego Chargers: Alvin “Bud” Dupree, Edge, Kentucky. Dupree is a divisive prospect because his impressive physicality doesn’t always translate into useful football production. His strength would allow him to play the strong edge and allow Melvin Ingram to attack with his speed from the other side.

18. Kansas City Chiefs: Devante Parker, WR, Louisville. Taking a wideout who might actually catch a touchdown pass--something no Chiefs WR did in 2014--sure seems like a good idea, and Parker is a dynamic guy with the ball in the air. If they sign Jeremy Maclin (wink wink) change this pick to a defensive end like Mario Edwards or Michael Bennett.

20. Philadelphia Eagles: Arik Armstead, DE, Oregon. Is it a little too convenient slotting an Oregon player to his former coach in Philly? Perhaps. But Armstead is a legit first-round athletic specimen and the Eagles need to bolster the defense. The familiarity is a trump card over guys like Dupree and Ray.

21. Cincinnati Bengals: Shane Ray, Edge, Missouri. Ray is not the typical Bengals edge defender in that he’s not super long and gets by more on pure speed than a combo of speed and power. That’s a good thing, and so is Ray’s backside pursuit vs. the run.

22. Pittsburgh Steelers: T.J. Clemmings, OT, Pittsburgh. The Steelers stay close to home to reinforce their offensive line. Clemmings played RT in college after moving from the defense and probably needs to stay there as a rookie, but his high ceiling makes this a nice long-term investment. Sleeper pick: Eric Rowe.

23. Detroit Lions: La’el Collins, OT, LSU. Collins brings versatility to a line where only right guard Larry Warford’s position is set in stone. His physical style and snarl would be welcomed in Detroit. Offensive line and cornerback are just as, if not more likely as defensive tackle, which many folks will blindly slot here.

24. Arizona Cardinals: Stephone Anthony, LB, Clemson. This is going to be higher than you see Anthony elsewhere, but it’s not without reason. Scouts are a lot higher on the long, savvy Anthony than the general public.

25. Carolina Panthers: Eric Rowe, CB, Utah. One of the Combine’s big winners, the converted safety has the tape to back up his strong workout numbers. He might be better at safety, though he made it clear he prefers to be a corner. Carolina gets bigger and faster at a position of need.

26. Baltimore Ravens: Andrus Peat, T, Stanford. The giant Peat is one of the toughest players in this draft to slot. He could go in the top 10, he could fall into the 40s and I don’t think many would be surprised with either outcome. Two reasons why Baltimore would pull the trigger: GM Ozzie Newsome loves players with NFL pedigree and Peat’s length on the edge is unteachable.

27. Dallas Cowboys: Mario Edwards, DE, Florida State. Controversial picks are nothing new in Dallas, and Edwards would be one. Physically gifted and a terror versus the run, the former elite recruit never really developed as a pass rusher…or seemed to care much about it. Defensive line guru Rod Marinelli loves challenges like this, and he fills a big need. I do believe Edwards is going high.

28. Denver Broncos: Jordan Phillips, DT, Oklahoma. Phillips is an ideal nose tackle, the immovable object sort of player the Broncos have had in Terrence Knighton. As long as teams are satisfied with his back issue that dogged his Sooner career, consider this his draft floor.

29. Indianapolis Colts: Malcom Brown, DT, Texas. You’ll notice a big run on defensive linemen here at the end of the first round. Brown is the most accomplished interior rusher of the group, and there’s a decent chance he’s gone before here. The Colts need reinforcements, especially after cutting Ricky Jean Francois during the Combine.

30. Green Bay Packers: Michael Bennett, DT, Ohio State. Bennett offers the ability to play in odd or even fronts, and his creative use of his jolting power makes him a very effective disruptor. Green Bay could also attack the cornerback spot here, but in this case they go for improving the pass rush and frontline depth.

31. Seattle Seahawks: Dorial Green-Beckham, WR, Oklahoma. The buzz in Indy is that DGB is worth the risk in the late first. I vehemently disagree with that assessment but I’m not the one writing names on draft cards. The Seahawks have not been shy about taking risks on bad boys, though nobody since Lawrence Phillips has DGB’s inglorious résumé.

32. New England Patriots: Melvin Gordon, RB, Wisconsin. Gordon is a player I’ve found NFL teams are quite divergent in their opinions. Some like him higher than this, others wouldn’t touch him 30 picks later than this. This is the range I believe he goes in, and I don’t think it will be the Patriots making the pick. If New England holds onto the pick, put Jaelen Strong here in very light pencil.