T.O. Said No To 'Dancing With The Stars' 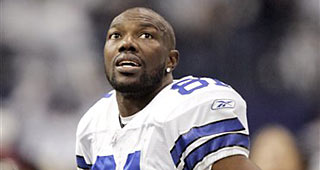 Terrell Owens turned down a gig on the wildly popular television show 'Dancing With The Stars' recently, according to a report on Yahoo.com. He was reportedly offered a slot on the recent run of the show, where Miami defensive end Jason Taylor placed second. "They asked me to do that last year and I graciously declined," Owens said. "I don?t need to get on national TV to show people I can dance. I do that 16, 17 weeks out of the year. I?ve been doing it all my career." Owens recently made his acting debut on the sitcom 'Under One Roof'. "I think I surprised a lot of people with my performance," Owens said. "For me, I feel like I can act. That?s what I want to do. If I wasn?t really comfortable with it and didn?t think I could really do it, then I wouldn?t have done it."