Toomer: 'No Question' Strahan Will Return 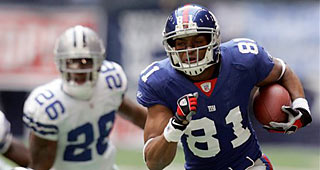 Giants receiver Amani Toomer believes that there is 'no question' defensive end Michael Strahan will return to the team next season, according to the New York Daily News. The gap-toothed defender has yet to decide whether or not he'll help New York defend their Super Bowl crown in 2008. "Oh, no question. I think he?ll be a member," Toomer said. "I think he loves that fact that he?s Michael Strahan. He loves that fact that he?s playing and doing the stuff that he loves to do. He loves hanging around with the guys." I think it is going to be a hard transition. But I think it is one of those thing that when you know you?re done it becomes a pretty easy decision and for him to be toiling over it I think that that says something right there," Toomer added.