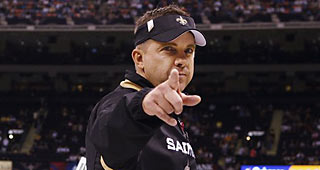 Sean Payton believes major changes could be coming to the NFL Draft in the near future.

In an interview with Colin Cowherd, the former New Orleans Saints coach predicted that the league will eventually move to a lottery system where the worst team isn't guaranteed the No. 1 overall pick.

"At some point, we're going to move to a lottery system in the NFL," Payton said.