Mac Jones On Sideline Outburst: 'We Needed A Spark' 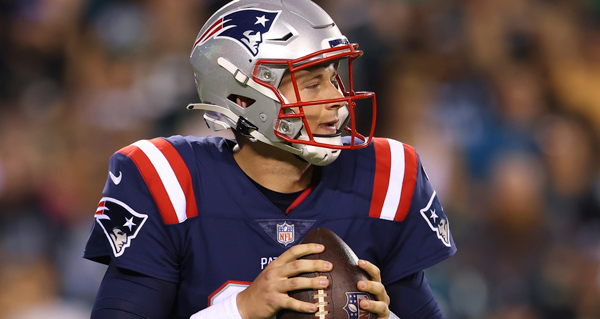 Mac Jones' frustration boiled over on the sideline during the New England Patriots' 24-10 loss to the Buffalo Bills on Thursday night, but the quarterback said it wasn't directed at anyone specifically.

The broadcast showed Jones at one point as he appeared to be saying, "Throw the f---ing ball! The quick game sucks!"

The Patriots played from behind for the final three quarters.

"Obviously, I just kind of let my emotions get to me," he said. "What I said was about throwing it deeper within the short game. I got to execute that part better. But it's the short game that we kept going to, which is working. But I felt like we needed chunk plays. I shouted that out to kind of get everyone going. That's emotional. That's football. I'm passionate about this game.

"Obviously, you don't want to let your emotions get the best of you. I think that's pretty much it. It wasn't directed at anybody. Just emotion coming out. We kind of needed a spark."

Jones said he believed he was on the same page as the coaching staff, specifically with Matt Patricia, who calls in the plays to him.

"It was just [saying], 'Let's go for it, let's be aggressive, let's take those shots. Just go down fighting,'" Jones said. "Matty P was on the same page. We kind of did it there at the end and moved it a little bit more."