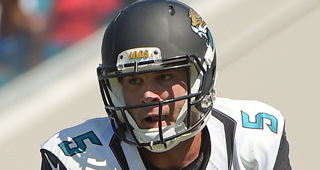 Blake Bortles has announced his retirement from the NFL.

"I quietly... I didn't tell anybody, I retired," Bortles said Wednesday on the Pardon My Take Podcast, when asked if he was in good shape to sign with an NFL team. "I guess you guys are kind of the first to hear it publicly."

Bortles helped lead the Jacksonville Jaguars to the AFC Championship Game in 2017 and then signed a three-year extension worth $54 million.