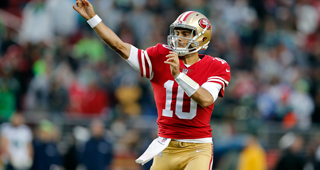 Jimmy Garoppolo remains a member of the San Francisco 49ers despite persistent trade rumors and the team's plan to start Trey Lance at quarterback this season.

Reports have surfaced that don't paint Garoppolo's tenure with the franchise in a positive light.

Garoppolo "disappeared" in most offseasons -- including in 2018, after he signed his five-year, $137.5 million deal, according to the San Francisco Chronicle.

"Once he left that press conference nobody heard from him for weeks and weeks," an unnamed 49ers assistant coach on the 2018 staff said. "He didn't return calls, he didn't return texts — he basically just vanished. And we were looking at each other going, 'What just happened.'"