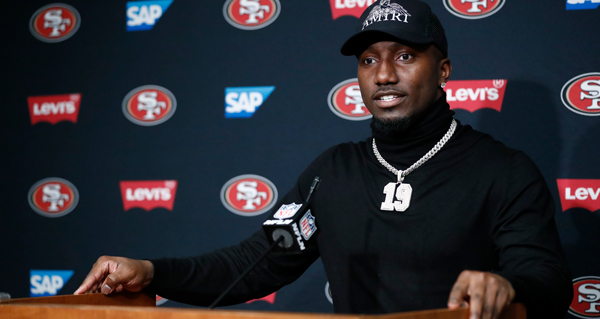 Deebo Samuel and Nick Bosa showed up for mandatory minicamp with the San Francisco 49ers on Tuesday.

Samuel requested a trade from the 49ers in April. Because Samuel reported for the minicamp, he is not subject to the fines that go with missing minicamp sessions.

Kyle Shanahan and general manager John Lynch have been adamant that they don't intend to trade Samuel.

When asked whether Samuel has rescinded his trade request, Shanahan said that's a better question for Samuel, who has not been available to the media since his trade request became public knowledge.

Shanahan did, however, say that discussions between the Niners and Samuel's representatives are ongoing and that he and Samuel have had the opportunity to speak in person recently.

"They always talk," Shanahan said. "I love our relationship with Deebo and hopefully that will help us be able to solve this contractually before we get to the season."