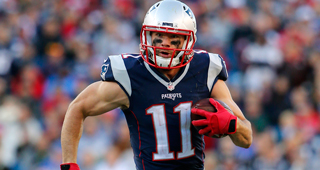 During Monday night's ManningCast of the New York Giants-Tampa Bay Buccaneers game, Julian Edelman said he had the opportunity to join a team other than the New England Patriots.

Edelman retired this past offseason after 12 NFL seasons.

The wide receiver said Tom Brady tried to recruit him to the Buccaneers as soon as the quarterback moved to Tampa Bay in 2020. Seven years earlier, Edelman said he also had a chance to join Eli Manning with the Giants.

"(Tom) hit me up the first day he signed there, like, 'You wanna come down?'" Edelman said of a potential reunion with Brady and Rob Gronkowski in Tampa Bay. "I was like, 'Absolutely not.'"

Edelman was a free agent in 2013, when he flirted with the Giants before re-signing with New England on a one-year deal.

"It was pretty close," Edelman told the Manning brothers. "I went and visited down there in Jersey and met with (Tom) Coughlin and had nothing but respect for the organization ... but I looked at my choices of going back to the Pats ... (and) Peyton, thank you for taking (Wes) Welker off our hands ... and the rest is history. You guys are saying, 'Once a Giant, always a Giant.' Well, 'Almost a Giant, always a Patriot.'"