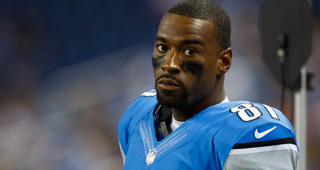 Calvin Johnson has opened up about his feud with the Detroit Lions.

In an interview with Graham Bensinger, the Hall of Fame wide receiver says the Lions still owe him more than a million dollars.

"I'm not gonna close a chapter, but I'm not gonna bend over backwards to try and do anything, because I didn't do anything. I did my job," Johnson said. "I'm not saying they gotta repay me the $1.6 (million) all up front, but they need to figure out a way to do it and not have me work for it. Because I already did the work for it."

According to an August story in the Detroit Free Press, Johnson was forced to repay the Lions $1.6 million of his signing bonus when he retired after the 2015 season.

The Lions had allegedly offered Johnson a three-year deal that would have paid Johnson $500,000 annually for appearance fees and a $100,000 donation for Johnson's charity, but Johnson did not take the offer, believing it showed the team was "not serious" about resolving the issue.