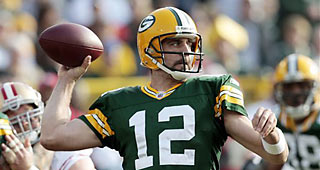 Former Green Bay Packers fullback John Kuhn says he has talked with Aaron Rodgers since the news broke last Thursday of the quarterback's unhappiness with the organization.

During an appearance on "The Zach Gelb Show on CBS Sports Radio," Kuhn said he wouldn't disclose the exact details of their conversation but painted a picture of a quarterback who is evaluating all aspects of the situation and hasn't made up his mind.

"He's conflicted because this man loves to play the game of football, this man loves to be a Green Bay Packer and this man truly sees careers," Kuhn said during the interview. "He's watched friends leave, he watched Brett Favre's career toward the end. He's watched all these things play out in front of his eyes; he's taken notes throughout his career. He's seen some situations that didn't feel were done or finished the way that they could or should have.

"He's just trying to take his earned destiny within his own hands. To that effect, I actually admire him because not many players in the NFL have that opportunity. I sure as heck didn't. I played until everybody told me 'you can't play anymore,' and it's a humbling feeling. Aaron Rodgers has an opportunity to take a little bit of that power."