Marty Schottenheimer Passes Away At 77 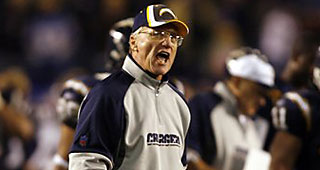 Schottenheimer was a head coach for 21 seasons in the NFL, leading the Cleveland Browns, Kansas City Chiefs, Washington and the Chargers.

Schottenheimer coached in three AFC Championship Games but never made a Super Bowl. Schottenheimer's NFL coaching career ended in 2006 following a 14-2 season with the Chargers and a divisional-round exit from the playoffs.