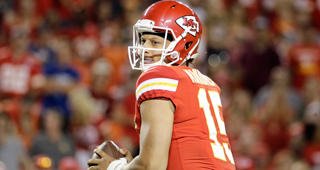 Patrick Mahomes has emerged as the best quarterback in the NFL, but not all of his teammates initially believed in the reigning Super Bowl MVP.

Tyreek Hill wasn't so sure when he first met his Kansas City Chiefs teammate.

"I thought he was trash," Hill said, "I ain't gonna cap. I ain't gonna cap. I ain't even gonna cap, man. When he first got there I was like, this is who y'all drafted right here? This is who y'all drafted? Hey but look, he proved me into a whole complete, I don't know. That second year, like his quarterback mechanics were different. It was like he was spending more time with his quarterback coach, spending more time with Coach [Andy] Reid, like learning the offense. Dude was like different."