Doug Pederson: Eagles Would Trade For Carson Wentz All Over Again 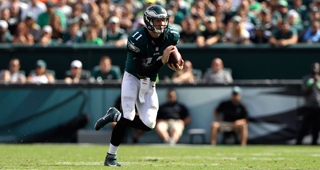 Doug Pederson remains confident in Carson Wentz despite the struggles of the Philadelphia Eagles this season.

The Eagles traded two first round picks, a second, third and fourth to the Cleveland Browns in order to use the second overall pick on Wentz in 2016.

Wentz is 35-29-1 with no playoff victories since. The Eagles play the Browns in Week 11.

Wentz was in the MVP conversation until a season-ending knee injury in 2017. This season, his passer rating (73.1) ranks ahead of just Drew Lock and Sam Darnold among qualified quarterbacks.