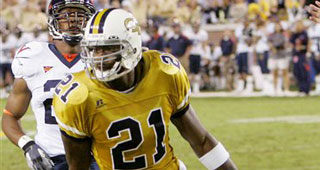 There is increasing speculation among personnel men that the Buccaneers are going to make a run at trading up from No. 4 overall to the top pick in the NFL draft in an effort to get Georgia Tech wide receiver Calvin Johnson. "I definitely get the feeling that's where the Bucs are going," an executive from another NFL team said this week. Three weeks ago, Tampa Bay GM Bruce Allen said he had been in contact with Raiders owner Al Davis.