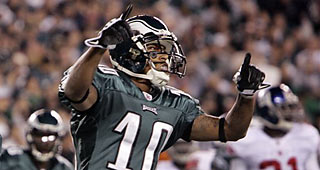 The Philadelphia Eagles and the NFL have condemned anti-Semitic comments from DeSean Jackson.

The Eagles called the posts “offensive, harmful and absolutely appalling” in their statement.

“DeSean’s comments were highly inappropriate, offensive and divisive and stand in stark contrast to the NFL’s values of respect, equality and inclusion. We have been in contact with the team which is addressing the matter with DeSean,” the statement said.

On his Instagram story feed, Jackson featured a quote he attributed to Hitler that said white Jews "will blackmail America. [They] will extort America, their plan for world domination won't work if the Negroes know who they were."

Jackson on Tuesday posted an apology on Instagram saying he "really didn't realize what this passage [attributed to Hitler] was saying" and that he was "sorry for any hurt I have caused."

"I just want to first off extend an apology on behalf of me and what I stand for because ... I never want to put any race down or any people down," Jackson said in the video. "My post was definitely not intended for anybody of any race to feel any type of way, especially the Jewish community. What I posted, I definitely didn't mean it to the extent that you guys took it and I just wanted to let you guys know that I'm, you know, very apologetic and I just want you guys to understand that it never was intended to be ... to put any race down or any religion down.

"... I just probably should have never posted anything that Hitler did, because Hitler was a bad person and I know that. I was just trying to uplift African-Americans and slavery and just enlighten my people. ... I didn't intend any harm or any hatred toward any people. ... I'm for love and I extend it every day."